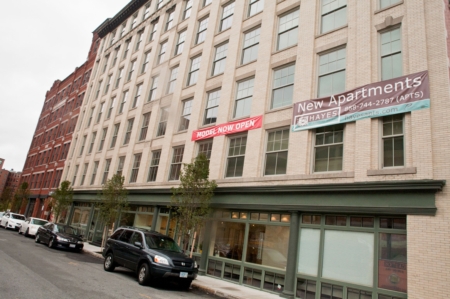 "It gives families a home they can afford -- a most basic human need," Cardinal O'Malley said. "This development is an example of how communities should be growing and serving the people there."

The ceremony celebrated the opening of The Hayes at Railroad Square, a 57-unit mixed-income housing complex in downtown Haverhill. The building opened to residents on Sept. 7.

Also attending and recognized at the ceremony was Alfred Arcidi, the owner of the old mill buildings which recently became The Hayes.

The Hayes at Railroad Square is comprised of three ground floor commercial spaces, as well as 700 to 1,500 square feet residential units, which are a mix of reduced-rate and market-rate units. Twenty-four of the units will initially be rental, but will be sold for home ownership at a reduced or market rate within five to ten years.

Alberghini is the president of the archdiocese's urban affairs planning office, which works for the development of affordable housing, neighborhood revitalization and housing advocacy. She recounted how their effort to construct affordable housing in Haverhill began three years ago when the city hosted a developers' conference to make developers aware of vacant properties.

"They did that because the mayor wanted to encourage developers to look at the city," Alberghini said.

"It really was how proactive the mayor and the city were," she continued. "This was a very deliberative effort to revitalize downtown."

Mayor Fiorentini agreed, saying the project is part of the "Haverhill Renaissance," a $150 million effort to attract new businesses and infrastructure to the downtown area.

"We're also doing this because it is our high duty as government officials to help those less fortunate than us," he said.

Tina Brooks, a state housing official, said Gov. Deval Patrick's administration hopes housing projects like The Hayes at Railroad Square could be built across the state. She also linked the project to what she calls the "Massachusetts recovery," with 65,000 jobs having been added since September.

"We see where responding to community need and opportunity comes together for the betterment of all," Brooks said.

"There's nothing that is more rewarding than being able to be handed a set of keys to your own home, to have a place where you're sleeping at night," Badour said.

The Hayes at Railroad Square was constructed from the former Charles Hayes Building, two adjacent historic mill buildings dating back to 1894 and 1911. The original buildings were used for electrical equipment manufacturing, photo finishing and millwork production.

Renovations on the old mill buildings took about one year.

Reduced-rate apartments are designated for people who earn between 50 and 80 percent of the median income for the Haverhill area. Monthly rent for such units is between $750 and $1,075 for one-bedroom apartments and $900 to $1,275 for two-bedroom units.