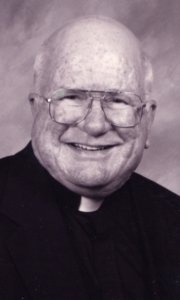 Father William F. Kenneally died peacefully at Regina Cleri on Oct. 12. A native of Boston's Jamaica Plain section he was born on July 17, 1925 the youngest of the four children of the late John and Elizabeth (Galvin) Kenneally. His brother and two sisters predeceased him.

He attended Jamaica Plain High School and was graduated in 1942. He enrolled at Boston College but after 18 months he decided to sign up and in 1943 found himself in US Army's 86th Infantry Division serving in both World War II theaters of operations: Europe and the Pacific. He returned to Boston College following his release from the Army and entered St. John's Seminary in 1947. Archbishop Richard Cushing ordained him to the priesthood at Holy Cross Cathedral on Feb. 5, 1953.

Cardinal Seán O'Malley was the principal celebrant of Father Kenneally's Funeral Mass celebrated at St. Agatha Church, Milton on Oct. 9. The parish's present pastor, Father Peter Casey was the homilist and was among the concelebrants who included Father James McCune, Father John Mansfield, and Father Eugene Curtin, all of Regina Cleri; and Father Kevin Sepe, pastor of St. Francis of Assisi, Braintree, vicar forane of the area.