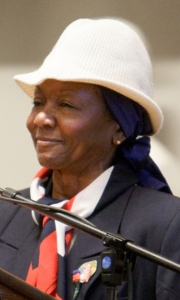 Diminutive, calm, measured, petite, quiet, unassuming -- all adjectives that have been used at one time or another to describe the stature and demeanor of the late Dr. Mildred Fay Jefferson. The first black woman to be graduated from Harvard Medical School, who was an unabashed champion of the Right to Life movement, died on Oct. 15 following a brief illness. She was 84

Giant, active, unreserved, outspoken, and direct -- are also adjectives that could be used to describe Dr. Jefferson's actions and activities on behalf of life -- especially the life of the unborn child.

Her medical practice and career were both carried out in the Boston area as a general surgeon at BU Medical Center and subsequently as a professor at BU's Medical School.

Without fanfare and certainly not for the sake of fame, she took up the cause of the unborn and dramatically, ably, and with carefully crafted argument linked the anti-abortion movement to the abolitionist movement of the pre-Civil War United States.

A founder of the National Right to Life Movement, she served on more than 30 boards of Pro-Life committees around the country.

She loved to engage folks in dialogue and was an easily conversationalist, interested and interesting in topics beyond her adopted cause. Eminently at home in varied religious groups she moved "ecumenically" and "inter-religiously" as well as personally and professionally among and between people.

Seven years ago in a magazine interview she dramatically challenged American society "I am at once a physician, a citizen, and a woman, and I am not willing to stand aside and allow this concept of expendable human lives to turn this great land of ours into just another exclusive reservation where only the perfect, the privileged, and the planned have the right to live,'' she stated.

The Massachusetts State Council of the Knights of Columbus singled her out for her pro life work honoring her with its prestigious Lantern Award in 1979.

A Memorial Service will be announced at a later date for Dr. Jefferson. She had no immediate survivors.