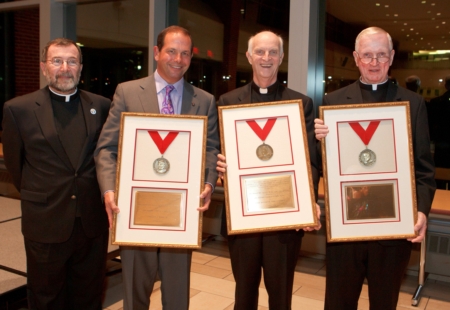 BOSTON -- Msgr. Cornelius McRae, Father John Grimes and William Burke were the recipients of this year's Cushing Awards, given by the Missionary Society of St. James the Apostle.

The awards were given at the society's 23rd Annual Cardinal Cushing Award Banquet Oct. 17 at Boston College High School.

Award recipient Msgr. McRae is currently the pastor of St. Catherine of Siena Parish in Norwood. He was ordained in 1961. During his career, he served as spiritual director of St. John's Seminary and the North American College in Rome. From 1986 to 1995, he was rector of Blessed John XXIII National Seminary in Weston. Throughout his priestly career, he has given retreats to priests, nuns and seminarians throughout the world, and has directed retreats for St. James Society missionaries in Bolivia.

Father Grimes was ordained in 1971. He is currently the pastor of St. Theresa of Lisieux Parish in Sherborn and Most Precious Blood Parish in Dover, as well as a vicar forane in the archdiocese. He taught at Blessed John Seminary from 1980 to 1995. In 1996 he joined the St. James Society and began a five-year ministry in Ecuador. During that time, he was a pastor, as well as being director of the master's degree program in Marriage Family Therapy at Salesian University. He also served as a spiritual and human development professor at the Theological School of Ecuador's Pontifical Catholic University, and spiritual director at Our Lady of Hope Seminary.

William Burke is president of the tools, hardware and commercial products group at Newell Rubbermaid. He serves in a leadership role with Habitat for Humanity, and is a board member of the Economic Development Council of Western Massachusetts and Springfield College. He is a parishioner at St. Michael Parish in East Longmeadow and is also a Knight of the Holy Sepulchre.