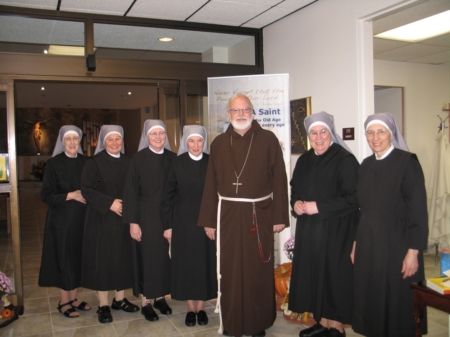 ''Later that day (Monday), I went to the Jeanne Jugan Residence in Somerville, run by the Little Sisters of the Poor (...) The Archdiocese is blessed to have the Sisters in our midst; their service is truly a witness to the presence of Jesus Christ in our midst.'' Pilot photo/CardinalSeansBlog.org

Last weekend (Oct. 8), I wrapped up my trip to Rome. While I was there, I looked up Andreas Widmer's nephew, Matthias, who became a member of the Swiss Guard a few months ago. (...) Andreas has been very active in our Catholic Men's Conference and young adult ministries. He is also a former Swiss guard and has delivered talks on his experience in the past. Andrea's brother has also served as a Swiss Guard. There are about 120 young men from Switzerland guarding the Holy Father and the perimeter of the Vatican City state.

Visit to St. Susanna's in Dedham

On Sunday (Oct. 10) I was back in Boston, and that day I went to St. Susanna Parish in Dedham for their 50th anniversary Mass. Father Stephen Josoma is the pastor there. Before the Mass, they asked me to bless their Peace Chapel, which is located in the vestibule of their church. The artists who painted the pictures there were the same artists who painted a very beautiful mural of St. Susanna, the patroness of the Church. The church and the grounds looked very beautiful, and the people very enthusiastic.

Installation and anniversary at Our Lady of Fatima

Later that day, I went to Our Lady of Fatima Parish in Peabody for a Mass to mark the 35th anniversary of their church and install their new pastor, Father Chris Gomes. The church was built in 1975, but the parish itself goes back to 1964. The pastor who built the current church, Father Jose da Silva Ferreira, was in attendance. (...) Father Jonathan Gaspar's grandmother, aunt, cousins, and other relatives flocked to the church to get a glimpse of Father Jonathan!

Later that day (Monday), I went to the Jeanne Jugan Residence in Somerville, run by the Little Sisters of the Poor, to mark the first anniversary of the canonization of their foundress, St. Jeanne Jugan.

Their Mother General was there visiting from France, and a number of priests concelebrated including Father Brian McCue, Father Chris Collins, a Jesuit who assists at the home, and Father Henry Jennings from St. Joseph's in Somerville.

As always, it is a great joy to visit with the Sisters and the residents and staff. The seniors who live at Jeanne Jugan receive excellent care that is always provided with the care and concern of the Church. The archdiocese is blessed to have the sisters in our midst; their service is truly a witness to the presence of Jesus Christ in our midst.