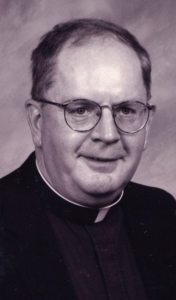 "Wherever he was, he was loved." The epithet that every priest probably wishes, but which ever priest who knew Father Dennis Nason would also agree was perfectly appropriate.

A native of Newburyport, Dennis T. Nason was born there on June 9, 1939. He was one of the nine children of the late Clinton and Anna (Cronin) Nason. After graduating from Newburyport High School, he entered the archdiocesan seminaries at Cardinal O'Connell in Jamaica Plain; then to St. Clement Hall, and St. John's in Brighton. Richard Cardinal Cushing ordained him to the priesthood at Holy Cross Cathedral on May 26, 1966.

His priestly ministry of 44 years was almost equally divided between assignments as an assistant for 19 years in three parishes and pastor for 25 years in three parishes. Immediately following ordination he was named assistant at St. Michael Parish, North Andover. Five years later he was named as an associate at Holy Name, West Roxbury where he served for the following decade; in 1981 he was named parochial vicar at Our Lady of Mercy Parish, Belmont. Priests and people alike were amazed at his calm, even serene, style amidst the great challenges of the parishes not a few of them created for him by brother priests.

He was delighted and made no bones about it when he was named pastor of St. Ann Parish in West Newbury. He would be back to the very familiar territory of "suburban" Newburyport and he would be the only priest assigned to the parish. He seemed in his element.

At the end of his term in West Newbury he was brought back to the thick of things at busy St. Raphael Parish, Medford. More property, more staff and more people -- but he again loved it. Just prior to Christmas 1990 the parish church had been destroyed by fire and Father Nason's principal effort was the building of the new church which Cardinal Bernard Law dedicated just three years following the fire on Dec. 19, 1993.

Five years later he was asked to take on another challenge being named the first pastor of the newly created parish of All Saints, Haverhill. The parish was created by the merger of four parishes St. George, St. Joseph, (French); St. Michael, (Polish); and St. Rita. Father Nason's calm manner and easy going personality led the parish through its formative years.

Praise flowed in from priests and current and past parishioners, from civic and ecumenical and inter-religious leaders following his death on Oct. 4 at Merrimack Valley Hospice House in Haverhill. He had wanted to remain in Haverhill for his last days and to have his funeral celebrated at All Saints Parish.

Following the funeral Mass, Father Nason was buried in St. Mary Cemetery, Newburyport. His immediate survivors are his sisters Anna Robinson and Madelyn Jacobs, both of Newburyport.