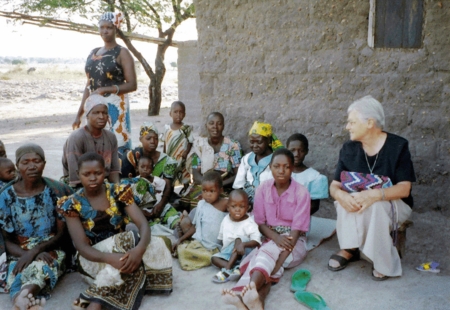 This is another in the series about missionary activity leading up to Mission Sunday, which has always been celebrated with special meaning by Religious missionary congregations within the Archdiocese of Boston.

That's because the Archdiocese of Boston has a long standing reputation for encouraging religious congregations whose primary charism was to other countries and to home missions. Thanks to the archdiocese and the Society for the Propagation of the Faith, Boston proved fertile ground in support of distinctive missionary activity around the world. Indeed the impact that Boston has made through the missionary activity of these religious communities is incalculable. As we approach Mission Sunday, this series takes note of the particular connections between mission activity and some of the missionary Religious congregations within the archdiocese.

Ever wonder how great institutions developed?

The congregation is unusual in that it has no founder but 11 French women who went to Oceania between 1845 and 1860 are considered 'Pioneers,' the first being Francoise Perroton. There were, however, other sisters who played a critical part in the growth of the congregation. One of those sisters at the turn of the last century was Mary Decker, a parishioner of Our Lady of Victories Church in Boston staffed by the Marist Fathers. Moved by stories of missionary sisters working among lepers in Fiji, she longed to join them. At first, she was held back because of family needs, but as circumstances changed she lost no time in traveling to Lyon, France in 1920. She was the first American recruit in the Society of Mary which was to eventually become the Marist Missionary Society.

That same year three other American young women followed her example, leading the congregation's superiors to recognize that Boston was indeed fertile ground for vocations. That decision had implications for Mary Decker. After just a year of novitiate, she took the name of Sister Mary Rose of Lima and became one of three sisters sent back to Boston in 1921 to open a house for postulants. Four years later, she was named superior of the Boston community. In 1931 she became the first superior general of the congregation when it received approval from Rome.

As vocations increased and a novitiate was built in Bedford, the Marist Missionary Sisters found a new friend in Father Richard Cushing, the Director of the Society for the Propagation of the Faith, who paid for the building. Father Cushing, later named a monsignor, then bishop, then archbishop, and then cardinal maintained an active interest. He prodded the sisters to "Get out and make your mission known." A frequent visitor to the Marist Missionary Sisters, he promoted their causes and was a generous sponsor of mission activities up until his later years.

Women who hold a sincere interest in learning more about the Marist Missionary Sisters should email smsmvoc@aol.com, visit the website www.maristmissionarysmsm.org or contact Sister Clare Rheume, SMSM at 349 Grove St. in Waltham.

Frank Mazzaglia is associated with the Missionary Alliance, which is comprised of Religious missionary congregations of priests, sisters, brothers, and lay people whose members toil in the vineyards for Christ all over the world.