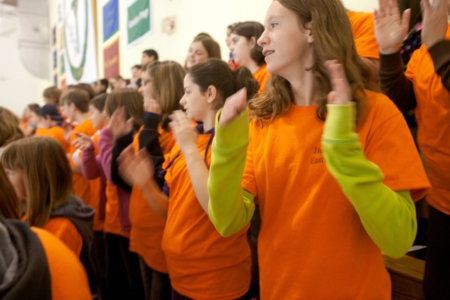 Leah McLaughlin, 13, of Holy Family Parish in Taunton, joins in the praise and worship music portion of the Archdiocese of Boston's youth rally held prior to the MCFL Respect Life Walk to Aid Mothers and Children. The rally, entitled "Walk as Children of Light," was held Oct. 3 at the Cathedral High School gymnasium. Pilot photo/Jim Lockwood

BOSTON -- Gathered on the morning of Respect Life Sunday, over 100 teens from the Archdiocese of Boston and the Diocese of Fall River participated in a pro-life rally aimed at learning how to "Love without measure," this year's USCCB respect life theme.

The teens met at Cathedral High School Oct. 3 for "Walk as Children of Light," the rally hosted by the Archdiocese of Boston's Office for the New Evangelization of Youth and Young Adults. The rally consists of praise and worship music and a speaker.

This year, the music was provided by the Cardinal Spellman High School liturgical choir, while the speaker was Mike Gormley, youth ministry director at St. John Neumann Catholic Church in Austin, Texas.

Following the rally, the teens attended the annual Respect Life Mass at the Cathedral of the Holy Cross. The main celebrant of the Mass was Father Matt Williams, the director of the New Evangelization of Youth office.

The teens then returned to the Cathedral High School gymnasium for lunch and to make posters and signs for the walk.

Afterwards, they walked to the Boston Common to join the Massachusetts Citizens for Life's (MCFL) Respect Life Walk to Aid Mothers and Children -- held every year on Respect Life Sunday.

Kathy Stebbins, the archdiocese's youth ministry coordinator, said the rally is meant to generate enthusiasm among the teens for what the Church teaches about the sanctity of all human life and the MCFL walk is a chance to display what they believe.

"It's really a great opportunity for kids to stand up for what they believe -- go get pumped up by the rally, the talks and the Eucharist to fortify them," Stebbins said. "The march is a demonstration of their faith -- what they believe in as Church."

Gormley, the rally speaker and a youth minister in Texas, told the teens about the importance of witnessing to what the Church believes, specifically in regards to the sacredness of human life.

He discussed the impact that teen witness can have, citing his own stories from praying in front of abortion clinics with his father, a pro-life defender in the Houston area.

He described the experience as non-violent witness for the defenseless.

Gormley said there is a group of teens that today pray outside that same Planned Parenthood at which he prayed in his youth.

"They're walking as children of the light," he said.

He called on teens to promote a culture of life by actively reflecting on the values society is trying to promote. Gormley told the young people to focus on cultural change rather than attempting to change legal codes, because a culture must change before its laws can change.

He concluded by addressing the reasons for pro-life rallies.

He said that protests are not meant to change opinions on the controversial abortion issue, but rather to be a "witness" to the parents of babies who died as a result of abortion and the babies themselves, who Gormley said "never had a voice or a choice."

Madeleine Nelson, 14, a parishioner at Blessed Sacrament Parish in Walpole, attended this year's Boston youth rally as well as the annual March for Life in Washington, D.C.

"I don't believe in abortion," she said. "It's life. They shouldn't do that."

Rally attendee Shawn Hamel, 15, a sophomore at Central Catholic High School in Lawrence said, "You're saving a life by doing this. You're saving many lives, hopefully."