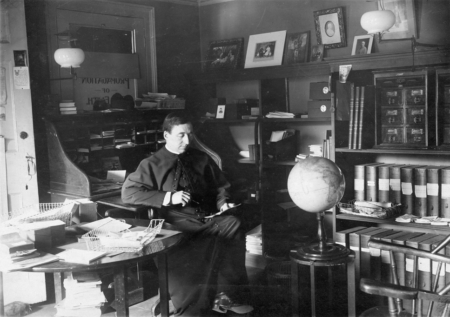 Father James A. Walsh is pictured in the office of the Propagation of the Faith in the early 20th century. Pilot photo courtesy/Maryknoll

The Second Vatican Council defined the mission of the Church as "the evangelization and the implanting of the Church among peoples or groups in which it has not yet taken root." The "Ad Gentes Divinitus decree," in effect, makes missionaries of all Catholics.

Long before "Ad Gentes Divinitus," however, the Archdiocese of Boston enthusiastically welcomed religious congregations whose primary charism was to other countries and the home missions. Thanks to the archdiocese and the Society for the Propagation of the Faith, Boston proved fertile ground in support of distinctive missionary activity around the world. Indeed the impact that Boston has made through the missionary activity of these Religious communities is incalculable.

In the early days of the last century, the United States was itself considered mission territory; so it was a bold vision that could even conceive of an effort to awaken Catholics to a wider global mission role for the American Church. Nevertheless, that was the vision of Boston-born Father James A. Walsh who, together with several other priests, founded the Catholic foreign Missionary Society of America which became what we now know as the Maryknoll Fathers and Brothers.

James Anthony Walsh was born in Cambridge in 1867. After public elementary school, he graduated from Boston College High School and went on to Boston College. He later transferred to Harvard College to study bookkeeping as a "special student," but completed his studies at St. John's Seminary. Ordained at the Cathedral of the Holy Cross in 1892, he was assigned to serving St. Patrick's Church in Roxbury until he was appointed Director of the Society for the Propagation of the Faith in 1903. Some trace the idea for Maryknoll to 1910 at the 21st Eucharistic Conference in Montreal when Father Walsh shared his vision with Father Thomas Price of North Carolina.

Together with Father John I. Lane of Boston, the three priests travelled to Rome where the idea of an American missionary effort won the approval of Pope Pius X's on June 29, 1911. Back at home, the idea caught fire quickly and the first Maryknoll missionaries arrived in Kong-Moon, China in 1918 whose six million inhabitants were plagued by civil wars, bandits, flooding, dysentery, and small pox.

As though the work of spreading the faith was not difficult enough, Maryknoll missionaries would find themselves caught up in swirling world events. Between the Second World War, Communist China, Korea, and Vietnam, many Maryknollers were imprisoned or expelled. Still, the seeds were sown and the faith continued to spread.

During 2011, Maryknoll Fathers and Brothers will celebrate its centennial. The theme of the centennial year "The Gift of Mission -- The Maryknoll Journey" will celebrate the U.S. American Catholic missionary organization as it continues to compassionately combat poverty, provide healthcare, build communities, promote human rights, and share God's love. For more information about Maryknoll, visit www.maryknollsociety.org.

Frank Mazzaglia is associated with the Missionary Alliance which is comprised of Religious missionary congregations of priests, sisters, brothers, and lay people whose members toil in the vineyards for Christ all over the world.