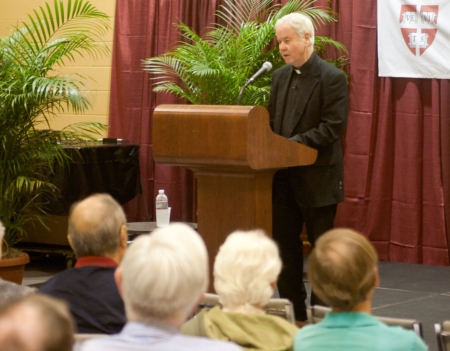 CAMBRIDGE -- A leading international scholar on Blessed Cardinal John Henry Newman said the newly-beatified 19th-century British cardinal was a multifaceted innovator who broke with much of the philosophical thought of his time at a lecture at the Harvard Catholic Center Sept. 29.

The lecture was part of a series of presentations on Cardinal Newman taking place this year at the center.

Father Ian Ker, a theology professor at Oxford University and author of more than 20 books on Cardinal Newman, gave an evening lecture entitled "The Achievement of John Henry Cardinal Newman" to about 100 people at DiGiovanni Hall.

Father Ker called Cardinal Newman a "Renaissance man" and showed how he embraced many disciplines, including philosophy, theology, and even satire, through his writings.

He began his presentation by describing how, as a philosopher, Cardinal Newman's writings departed from Enlightenment thought that dominated Europe in the 18th century.

"Newman's philosophy is much richer than the epistemology of the Enlightenment," Father Ker said.

As a theologian, Father Ker said Cardinal Newman did not view Christianity as an "abstract concept" but rather as a "living idea depending on its living Church."

Father Ker noted how Cardinal Newman's theological writings are helpful in explaining Church dogma, such as papal infallibility, which was defined at the First Vatican Council. The council met in Rome from 1868 to 1870.

According to Father Ker, Cardinal Newman's writings can also be used to explain various aspects of the Church which "like Christ, who is priest, prophet and king, the Church has to exercise simultaneously the offices of teaching, ruling and worshipping."

Cardinal Newman is also a satirist, whose satire "is intellectual, and not moral," according to Father Ker.

This lecture was the second talk that Father Ker gave at Harvard that day. He also gave a noontime presentation entitled "John Henry Newman: The Idea of a University -- A Classic for Our Times?" where he spoke of Newman's life and said text.

Senior chaplain at the Harvard Catholic Student Center Father Michael Drea believes this series is an opportunity "to really engage our students on a level to help them be formed to be great leaders in the world, in their service as disciples, as well as knowledgeable ambassadors for the life of the Church."

"In many ways, (Cardinal Newman) is the godfather of Catholic higher education and Catholic campus ministry," Father Drea said.

Katherine Broach, director of development for the Harvard Catholic Center, said the lecture series is an effort to deepen knowledge of the Church for Harvard University students', 25 percent of whom are Catholic.

"There's a very rich Catholic intellectual tradition our students may not be aware of," Broach said.

"The timing couldn't have been more perfect," she added.

Blessed Cardinal Newman was beatified by Pope Benedict XVI at a Mass in Birmingham, England on Sept. 19.

Cardinal Newman left the Anglican Church and converted to Catholicism at age 44. The pope announced during his September visit to England that Blessed Cardinal Newman's feast day would be Oct. 9, the day of his entry into the Catholic Church.

For retired Auxiliary Bishop of Boston John Boles, who attended Father Ker's evening lecture, Cardinal Newman is not only an outstanding philosophical thinker, but also one who is "exciting and he gives historical and philosophical basis to serious discussions of problems of authority and problems of faith."