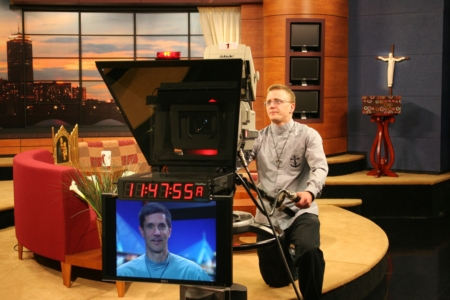 This fall CatholicTV is running a 13-part series on campus ministry titled "Hope on Campus." Brother Brandon Frank of the Brotherhood of Hope is directing the camera as Brother Rahl Bunsa, General Superior, speaks in front of the camera. Pilot photo/Courtesy CatholicTV

BOSTON -- What happens when you combine reality TV, college students and campus ministers? Well, it's bound to be different, whatever else it may be. It's no surprise then that CatholicTV's newest series, Hope on Campus, may raise a few eyebrows from unsuspecting viewers. The 13-Part series explores the life of the Brotherhood of Hope, a community of Catholic brothers based in Boston, and their vibrant ministry to Catholic college students on secular campuses.

Two years in the making, Hope on Campus began when CatholicTV approached the Brotherhood in early 2008 hoping to produce a show with them.

Much of the video footage was shot on-site by students and covers everything from Division 1 football games and Mega Retreats to service trips and weekly prayer gatherings.

For Brother Brandon Frank, the brother responsible for the series, the on-campus videos make this series "unique and attractive."

"We're grateful to share our mission of the New Evangelization among college students through their videos."

Each episode highlights a particular dimension of the Brotherhood's campus work. The series covers everything from sacramental life and ministry to alternative spring breaks and mission trips to Tanzania to an episode titled "Sex and Life on Campus."

The series finale explores vocations, since both solid marriages and more than 50 priestly and religious vocations have come from the Brotherhood's work in the last two decades, especially at Boston University, Rutgers, Northeastern, and Florida State University.

Apart from the student footage, the shows are filled out with a number of moving student testimonials and interviews where current students and recent alumni reflect on how God has changed their lives through the work of the Catholic Centers and the Brotherhood of Hope.

The episodes also include studio interviews with various brothers hosted by Sara Fernandes, an alumna of the outreach at Boston University who also served as an intern with them at Northeastern University.

"It all started when I was a freshman at Boston University and they were looking for a spaghetti cook for the Catholic Center." Fernandes said.

She began her tenure with the brothers cooking for over 80 students each Tuesday night and she has stayed connected ever since.

"The brothers are involved in many aspects of college life and once you are a part of the outreach community you really never leave," she said.

Fernandes is not the only Brotherhood alum on set. Brother Brandon, the mastermind behind the camera and the series, was himself a college student at Florida State when he met the brothers.

He describes himself then as a lapsed Christian who met the brothers on a fishing trip. A conversation with one of the brothers while fishing led him to reconsider his faith. Eventually his life changed, he entered the Catholic Church and went on to discern a vocation with the Brotherhood.

Despite his background in cinematography, Brother Brandon admits: "I didn't know fully what I was getting myself into when CatholicTV approached us."

Another alumnus who assisted the brothers was Dave Radley, a graduate of Berklee College of Music who was involved with the ministry at Northeastern. He wrote and played the music for several of the student videos. Most of the other videos made use of the Brotherhood's own music from their two CDs.

Hope on Campus is from start to finish an exercise in creative collaboration between media professionals, college students, and consecrated brothers all in service of the Gospel -- a truly worthy exemplar of John Paul II's call to the New Evangelization. For more information visit Catholic TV at www.catholicTV.com or the Brotherhood of Hope at www.brotherhoodofhope.org.