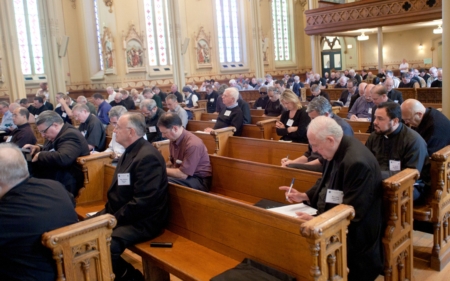 Nearly 300 priests, deacons and lay leaders participated in a two-day conference at Our Lady Help of Christians Parish in Newton Sept. 22 and 23 to discuss the new translation of the Roman Missal. Pilot photo/ Jim Lockwood

NEWTON -- Change is coming to the language of the Mass and this week clergy and lay leaders took a first step in preparing for that change.

Nearly 300 priests, deacons and lay leaders gathered at Our Lady Help of Christians Parish in Newton for a two-day conference Sept. 22 and 23 discussing the new translation of the third edition of the Roman Missal. Participants came mainly from the Archdiocese of Boston.

The conference was co-sponsored by the USCCB and the Federation of Diocesan Liturgical Commissions (FDLC), and has been offered in cities around the country since April.

The USCCB is advising pastors it will take about nine months to prepare their congregations for the new Mass translations -- translations required by the Vatican to be implemented by Advent 2011.

"The liturgy is the greatest expression of our faith, so the USCCB continues to offer assistance to bishops and liturgical leaders throughout the country," said Father Jonathan Gaspar, co-director of the Archdiocese of Boston's worship office.

"With these changes we see a real opportunity for liturgical renewal and an opportunity to enhance liturgical catechesis throughout the country and the English-speaking world," he continued.

FDLC Executive Board member and conference presenter Peter Zografos suggested that although most of the changes are in the parts of the Mass recited by the priest, "the parish communities have to take this time, not so much about the language, but so they can understand the catechesis of the Mass."

Msgr. Anthony Sherman, director of the USCCB's Secretariat for Divine Worship, was also a presenter.

Workshop sessions familiarized attendees with specific changes in the language in the liturgy, which more closely mirrors the original Latin texts than the translations in use currently.

Other topics explored at the meeting include chants that will be used as a result of the new translation, resources pastors and parish lay leadership can use to familiarize their congregations with the changes and a suggested timeline for effectively catechizing the people so they are fully prepared for the translations.

Father Gaspar said the archdiocese has formulated a three-phase plan to bring the changes to parishes.

The archdiocese is now in the first phase of the plan; preparing the priests.

The first phase included a summer workshop hosted by the archdiocese June 2 to 4 at St. John's Seminary.

Father Gaspar said that the second phase will continue through next spring and includes educating lay liturgical leaders. The final phase will be a parish-based implementation during the summer and fall of 2011.

Father John Sassani, pastor of Our Lady Help of Christians, said that his parish has not yet implemented a formal plan to familiarize the laity with the new translations, but said the information presented at the conference should help him prepare his congregation.

"I think the conference was helpful because they answered very practical questions," said Father Sassani said. "They gave us a vision of what it is going to be like a year from now."

"We're in a position now to work with it." Father Sassani also said.

However, he also pointed out that the process may be challenging because congregations are familiar with the current liturgy.

The current translation of the Roman Missal, the Mass of Paul VI or the "Novus Ordo," has been in use since 1970.

"For everything else, we get used to things one way and change is not always easy," Father Sassani said. "From some of the texts I've seen, they're beautifully written and that will help."

Father William Dunn, parochial vicar at St. Mary Parish in Chelmsford, said he is sure the transition process will go smoothly.

"It's certainly more of an accurate translation," Father Dunn said. "I think it won't be much of a hurdle for the people. They'll get used to it."