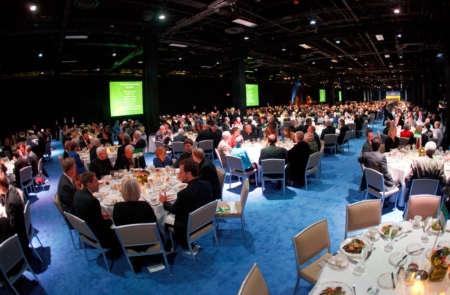 BOSTON -- Nearly 1,500 people packed an expansive ballroom at Boston's Seaport World Trade Center Sept. 16 for a gala dinner to benefit the Archdiocese of Boston's clergy benefits fund, and pay tribute to the priests whose selfless sacrifices have touched the lives of faithful Catholics.

The second annual Priest Appreciation Dinner grossed $1 million for the archdiocese's Clergy Benefits Trust, according to Clergy Funds Advisor Joe D'Arrigo. Final tallies on the amount raised for the fund were unavailable at press time since dinner expenses still needed to be accounted.

"A million-dollar dinner in Boston in today's economy is significant," he said.

Speakers for the evening paid tribute to the services of the archdiocese's priests and the role they play in the daily and sacramental lives of Catholics.

Cardinal O'Malley discussed the importance of priests to the sacramental life of Catholics, saying Catholics cannot receive the Eucharist without priests.

"We cannot live without the Eucharist," Cardinal O'Malley said. "The Eucharist is what brings us together as God's people where the Lord makes a gift of himself to us and gives us the strength to lead our lives."

Wahle, a 2006 graduate of the University of Notre Dame and alumnus of Notre Dame Academy in Hingham, gave a testimony of how the priests she has known have nourished her Catholic faith at different points in her life -- as a young parishioner at Resurrection of Our Lord and Savior Jesus Christ Parish in Hingham, to her college years and even during recent international visits.

"We are here to thank you, our faithful priests, for serving as a living testament to our beautiful faith," she said.

Driscoll, an event co-chair, followed Wahle to the podium and echoed Wahle's sentiments about the importance of priests in the lives of Catholics.

"The sacraments mean the most to me as a Catholic. They are critical to my faith in God and his Church," Driscoll said. "Without the priests here I would not have been able to receive them, or any of us."

She also credited the priests for their "self sacrifice and constant service" especially in the rebuilding of the Archdiocese of Boston since the abuse crisis and reconfiguration.

"It's all the great news that's not being reported today and it is because of their work for the better," she said.

The speaking portion of the program also touched on recent progress the Archdiocese of Boston has made to trim the operating deficit of its clergy fund.

Kaneb, a dinner co-chair and Hood chairman and CEO, remarked on the progress of recent efforts to raise money for the priests' retirement trust during his portion of the speaking program, noting how in 2008 the fund had a $10 million operating deficit and by next year the fund will be operating at a near zero deficit.

"This has been primarily a cost-cutting success story," said Kaneb. "All of us who are in business know you can't save your way to success."

"It's a long turnaround," he said. "We're only two years into it. We're on schedule or ahead of schedule."

D'Arrigo said that the archdiocese has trimmed $6 million in operating expenses as part of deficit-reduction strategies, and has also tapped into government programs to pay benefits.

Rick Cassani, a parishioner at St. Jerome Parish in Weymouth, praised the efforts of the dinner to raise money for the priest retirement fund.

"They deserve to have comfort in their retirement," Cassani said. "Hopefully this will go such a long way in helping them to reach that goal."

Sally McIntyre, another Catholic layperson who attended the dinner, reflected on the event's other purpose -- praising and thanking the priests for their tireless sacrifices.

"They deserve so much praise. They really do," said McIntyre, a parishioner at Corpus Christi-St. Bernard Parish in Newton. "That's what it's all about -- giving praise to the priests for their service. Without them where would we be?"

Priests who attended the dinner responded said they were encouraged by the event.

"It gives great hope to the whole Church because in this era, when there is so much talk about secularism, there is rooted deep in people's faith that we're here to help each other," said Father Patrick McLaughlin, pastor of St. Joseph Parish in Medford.

Father Harry Kaufman, parochial vicar at St. Margaret Parish in Burlington, was touched by the event.

"It's uplifting and intelligent," said Father Kaufman. "We serve the people and for them to show us their gratitude is most wonderful. It makes it all worth it -- the 24/7 that we give to the people."