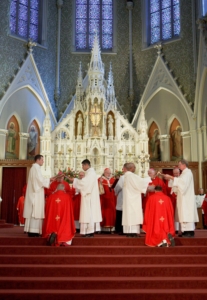 Deacons hold the Book of Gospels over the heads of Bishops Arthur Kennedy and Peter Uglietto during their ordination to the episcopate Sept. 14, the Feast of the Exaltation of the Holy Cross. Pilot photo/Gregory L. Tracy

SOUTH END -- On the Feast of the Exaltation of the Holy Cross, Sept. 14, Bishops Arthur Kennedy and Peter Uglietto were ordained to the episcopate by Cardinal Seán P. O'Malley.

With their ordination, Bishops Kennedy and Uglietto became the 34th and 35th auxiliary bishops of Boston.

Nearly 300 priests and bishops from around the country were in attendance to witness the ordination of Bishops Kennedy, 68, and Uglietto, 58, in the nearly three-hour ceremony. Among those present was Cardinal William Keeler, Archbishop Emeritus of Baltimore.

The Rite of Ordination began with a petition for ordination to Cardinal O'Malley and readings of the Apostolic mandates of Pope Benedict XVI appointing each respective bishop.

In his homily that followed, Cardinal O'Malley linked the role of a bishop to the triumph of Jesus Christ on the cross.

"Our bishops need to be men of the cross, transformed by the love and power of the Holy Cross," Cardinal O'Malley said.

Cardinal O'Malley also reminded the faithful that in the cross is redemption for sin. He made reference to the fall of Adam and Eve in the Book of Genesis.

"The tree of Genesis brings sin and death," he said. "The tree of the cross brings mankind's second chance."

Cardinal O'Malley said bishops are successors of the Apostles, who first communicated the meaning of Jesus' death on the cross.

"The love and power of the cross was to be available everywhere through the apostles, our first bishops," Cardinal O'Malley said.

Following the homily, the Rite of Ordination continued with Bishops Kennedy and Uglietto promising obedience to the pope and his successors, and to guide the people of God.

The rite continued with the laying on of hands by Cardinal O'Malley, Boston's other auxiliary bishops and visiting bishops from other dioceses.

The ordination rite concluded with the presentation of each bishop's ring, miter and crosier by selected assisting clergy.

Afterwards, Bishops Kennedy and Uglietto were greeted by the other bishops during the kiss of peace.

Bishop Kennedy, in his remarks, spoke about the significance of being ordained on a day celebrating the Holy Cross.

"To be ordained on the Solemnity of the Exaltation of the Holy Cross and in the Cathedral of the Holy Cross focuses on the source of all the divine gifts and their purpose, namely that of preparing us to be saved and to share in the victory of the Cross, and in eternal life with the Blessed Trinity, Father, Son and Holy Spirit," Bishop Kennedy said.

"This destiny intended for us by God is revealed to us by Christ as He draws us to the mystery of the eternal love that is at the heart of all reality. This is the fact that we affirm when we sign ourselves in our praying and in response to the blessings conveyed to us through the Church. The sign of the Cross unites us to Christ's cross and sacrifice," he added.

Bishop Uglietto, in his remarks, addressed the need for reconciliation and healing in the local Church, and said that everyone, not just priests and bishops, must participate in the process.

"From the moment of your birth and mine, God has assigned a role for each of us in his plan to save the world," Bishop Uglietto also said. "So each one must do his or her part: to seize the moment, to assist in healing the wounds of sin and division, to work together for unity despite differences, to make the sacrifices necessary for effective pastoral planning for the future."

Bishop Kennedy will remain as rector of St. John's Seminary in Brighton, a position he has held since 2007.