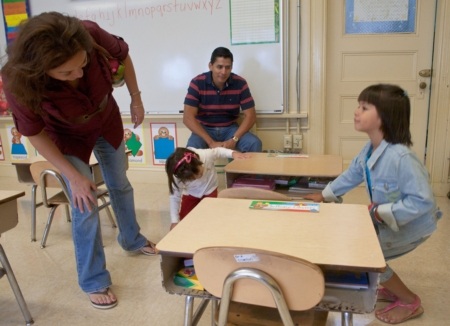 Lawrence Catholic Academy first grader Danna Lituma (right) shows her desk to her mother, Maria, and sister, Diana, 3 while her father, Johnnie, looks on, at her school's open house Sept. 12. Lawrence Catholic Academy formed this year from the consolidation of St. Patrick School in Lawrence and Our Lady of Good Counsel School in Methuen. LCA is housed in the former St. Patrick's School building. Pilot photo/ Jim Lockwood

LAWRENCE -- Students, faculty, parents and friends of the newly-formed Lawrence Catholic Academy (LCA) who gathered Sept. 12 for the opening Mass learned that the school would get an unexpected boost from the Catholic Schools Foundation.

In front of a standing-room-only crowd at LCA's opening Mass at St. Patrick Church, Catholic Schools Foundation CEO Mike Reardon announced that the school has been awarded an additional $125,000 one-time grant. This grant is in addition to the scholarship money the school has already received.

Lawrence Catholic Academy opened this year from the consolidation of the former St. Patrick and Our Lady of Good Counsel Schools. The Catholic Schools Foundation already awards scholarships to 90 percent of the school's students totaling $325,000.

"This really is an opportunity for revitalization of Catholic education in the city of Lawrence," Reardon said of the new grant.

"When you look at it, Catholic education was really founded to help new immigrant groups," he also said. "Lawrence has a significant new immigrant population. The opportunity to serve is tremendous."

In addition to Mass, the morning's festivities included a pancake breakfast in the parish hall and an open house at LCA, which is housed in the former St. Patrick School.

Principal Sister Lucy Veilleux, PM, said she has not formulated a specific use for the grant money yet, but said the funds may be used to help upgrade educational technology at the school or even use it for new textbooks.

"It says to me that they really want to support and live out our mission to provide the best education for our kids," Sister Veilleux said.

Speaking at the Mass, St. Patrick's pastor Father Paul B. O'Brien encouraged families of both parishes to form relationships with one another and God.

"If this school is going to work we must choose to be part of Mass every single Sunday," he said. "It's the guarantee that God's Will will unfold."

"There's no way our school can last unless we're actively worshiping," he continued.

Father Chris Casey, pastor of Our Lady of Good Counsel Parish in Methuen, called on both congregations to collaborate and "work faithfully," and make Jesus the center of their lives.

LCA is opening its first year with an enrollment of about 475, which Father O'Brien said is larger than St. Patrick's and Our Lady of Good Counsel combined.

"Recruitment of Hispanic students in Catholic schools is a challenge in much of the United States," Father O'Brien said. "In Lawrence, we're proud our schools are mostly Hispanic."

"It's an indication of the vibrancy of the Church," Father O'Brien added.

"Everything we do here involves financial sacrifice because financial resources are very limited," Father O'Brien said.

"I don't think we have anybody who is not sacrificing to make real Lawrence Catholic Academy," he also said.

Father O'Brien said the school is also supported by parish subsidies from partner parishes St. Patrick's and Our Lady's, as well as Corpus Christi in Lawrence.

In addition to Lawrence Catholic Academy, the city has one other parish elementary school -- St. Mary of the Assumption.

There have been several instances of local Catholic elementary schools merging to form Catholic academies in recent years.

Also opening this fall, Quincy Catholic Academy was formed by the consolidation of three schools in that city.