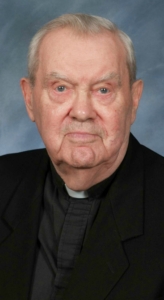 Cardinal Séan O'Malley was to be the principal celebrant of the Funeral Mass celebrated at St. Bernard Church of Corpus Christi-St. Bernard Parish, Newton for Father Gerard D. Barry who died at Brigham and Women's Hospital, Boston on Sept. 4. The Newton native would have celebrated his 85th birthday on Oct. 17.

A son of the late Joseph and Mary (Barr) Barry he was raised in Sacred Heart Parish, Newton Center and attended the parish grammar and high schools before heading down Beacon Street to Boston College. After two years at Heights he crossed Commonwealth Avenue and entered St. John's Seminary. Archbishop Richard Cushing ordained him to the priesthood at Holy Cross Cathedral on May 3, 1950.

His first priestly assignment was as an assistant at South Boston's St. Augustine parish. During 16 years there he baptized hundreds including Boston Auxiliary Bishop Robert Hennessey; he mentored many young people from the parish including Boston's one time mayor, Raymond Flynn. That he himself was an accomplished infielder gave him further credentials among the young men of the parish.

In 1966 he was named chaplain at Deer Island House of Correction and while serving there was also assisting at Holy Rosary Parish in Winthrop. He enjoyed prison ministry, because as he observed "they really appreciated the Church." Five years later he was assigned as an assistant at St. Cecilia Parish in Ashland, during which time he was also episcopal vicar of the Brockton vicariate in the South Region. A sign of the esteem of his brother priests in the area and the confidence of the archbishop, Humberto Cardinal Medeiros.

He was named pastor of St. Linus Parish in Natick in November 1975 and a few years later returned to his home town of Newton as pastor of St. Bernard Parish. He would remain there for just a month shy of 22 years, retiring on June 1, 2001. At the time of his retirement from the Newton parish he quipped "I guess I wasn't much of a missionary since I was never assigned more than 20 miles from Newton."