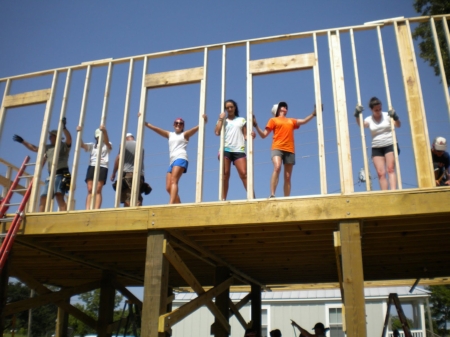 Volunteers from St. Anne in Littleton and St. Catherine in Westford help in home building in Mississippi during their most recent service trip in late July. Pilot photo/Courtesy Tom Emberley

BRAINTREE -- While Hurricane Katrina may have slipped from the headlines and memories of many, it is still very much alive in the hearts and minds of several local Catholics.

For the last four years, hundreds of teens, young adults, and their older chaperones from parishes in the Archdiocese of Boston have gone to Mississippi to volunteer with long-term recovery efforts following Hurricane Katrina.

While they can affirm that much has progress has been made in post-Katrina recovery, they also admit there is much more to be accomplished.

"I love going back because I get to see the progress that has occurred," said Brittany Watling, a member of St. Mary Parish in Holliston who recently completed her fourth volunteer trip in Mississippi. She is a freshman at the University of Connecticut.

Yet she also said, "Every year I see the same apartment buildings have not been fixed. That's kind of disheartening."

Since 2006, various parishes throughout the Archdiocese of Boston have sent teams of volunteers to the Diocese of Biloxi, Miss., which encompasses all of the state's coastline. Volunteers have assisted in various general contracting tasks involved in rebuilding homes such as demolition, carpentry, sheetrocking, painting, roofing, plumbing, and heating.

Job sites included working on single private homes or "Katrina Cottages," small one-story houses that were erected in Mississippi with federal grant money as an alternative to FEMA trailers.

"It's meant to experience Jesus Christ through dynamic prayer and dynamic service," said Matt Chick, youth minister at St. Mary's. "We want to get them out of their comfort zone and see that life is bigger than Holliston, Medway or whatever town they are from."

Parishes of the Archdiocese of Boston have sent volunteers during summer and winter months to work on the Gulf Coast for one-week intervals. While there, the volunteers stay in the parish hall at St. Ann Parish in Lizana, Miss., a rural area outside of Biloxi.

A typical day began with 7 a.m. Mass after which the volunteers headed out to job sites for a full day's work. Evening activities often included additional spiritual exercises such as the Sacrament of Reconciliation.

"It was very emotional. It took hours," said Jeff McLinden, an adult volunteer from St. Mary in Holliston. "It was beautiful to see all the kids. Practically everybody went to confession."

Each year, the number of volunteers from parishes in the Archdiocese of Boston increases.

Regina O'Connor, youth minister at Most Precious Blood Parish in Dover and St. Theresa Parish in Sherborn, helped initiate the trips. She said that in the first year, 180 volunteers went to Mississippi and in 2009 it was up to about 600.

McLinden, also of St. Mary's, said that no matter how high many volunteer, there is always plenty of work to be done.

"We think that each year we won't be able to keep everybody busy," he said.

"Every year we go they need help still," McLinden also said. "There are a lot of homes where people have never recovered from the storm. Katrina destroyed so many lives. People are still trying to recover from it."

"New Orleans gets all the news. They got the water damage," he said. "The Gulfport (Miss.) area got the wind and the rain. They got a double-whammy."

Bishop Roger Morin, a Dracut, Mass. native who now heads the Diocese of Biloxi, has visited the Boston volunteers at times during their trip and praised them for their enthusiasm and energy.

He also pointed out that the presence of so many volunteers gives the citizens of Mississippi hope for the future.

"They have been a very, very important and critical factor in the person-to-person contact of being able to bring a message to people. By being there, they are showing the care and concern the Church has for them," Bishop Morin said. "The fact that young Catholic parishioners from another part of the country are still willing to give up part of their summer vacation to help them out really increases the amount of hope that people have in being able to get things back in right order."

Emberley, an adult volunteer from St. Anne's in Littleton, discussed how volunteers are received there in everyday life.

He said that residents will let volunteers cut to the front of the checkout line at Wal-Mart.

"You see that and hear that everywhere you go," he said. "The people they put you in front of don't complain. They're super appreciative of the work you are doing."

Residents see the volunteers as special people who are helping them cope with the storm's after-effects.

"We are occasionally still overwhelmed by the destruction and the magnitude of Katrina, and those tasks still to be completed. So many of the emotions we have felt can only be compared to grief at the death of a dear one. We grieve the loss of lives, livelihood, lifestyles, our material comfort, and routines. But this tragedy did not leave us where it found us. We Mississippians are tough cookies," said Shirley Henderson, communications director for the Diocese of Biloxi, in an e-mail.

"People say things will get better with time. But it is what we do with our time that will make the difference and help us all rebuild and re-find and refine our lives and that of our communities," she added. "We know we are a blessed people. God sent His angels in the form of a multitude of volunteers to encourage and help us in this recovery process."