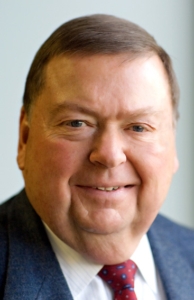 "He was one of those people who you are glad you were able to walk through life with, no matter how long or short the trek." So one of his friends said of Edward "Eddie" Saunders the Executive Director of the Massachusetts Catholic Conference (MCC) who died on Aug. 28 after a brief battle with a recently diagnosed virulent form of cancer.

The only son of the late Edward and Ellen (Nolan) Saunders and the brother of Ellen (Saunders) McCarthy of Falmouth, he was a Boston native and grew up in the city's Roslindale section. He was an alumnus of Boston College High School and Boston College, and of Suffolk Law School.

Before coming to the MCC he served as an attorney on the Massachusetts Turnpike Authority. He was well known in many circles and as his cousin, Janet O'Connor of Needham said "When we were chatting among the family and recalling Eddie's friends and contacts we were amazed at the variety of people from all walks of life who populated his phone directory. Eclectic describes it best."

What was not eclectic was his loyalty as son, brother, uncle, cousin, friend. Nor was his loyalty to Boston College ever for a moment in doubt. Perhaps his well planned and organized tailgates at BC football games tells it best. He arrived early, secured a spot near the garage gate entry to Shea Field, set up the pre-game provisions and awaited the arrival of anyone he had invited and anyone they had invited! Win or lose, winning or losing season, whatever the weather, unless a family or professional obligation required otherwise, he was there.

Just a few weeks ago he was on vacation in Falmouth and was not feeling well. He reluctantly went to the hospital and was immediately sent to Boston, New England Medical Center where the doctors diagnosed an aggressive cancer that had spread through many parts of his body. They could not offer any treatment that would arrest, never mind reverse, the devastating effects of the disease.

He died in the early hours of Aug. 28 with his family and friends surrounding him at NEMC.