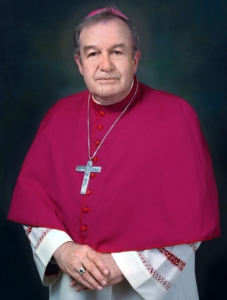 Bishop Roger Morin is the bishop of the Diocese of Biloxi, Miss., a diocese along the Gulf Coast which was greatly impacted by Hurricane Katrina in 2005, including damage to several churches and Catholic schools. Following the hurricane, the diocese began a recovery effort, which still continues five years after the storm.

Prior to coming to Biloxi in March 2009, Bishop Morin served as vicar general and moderator of the curia for the Archdiocese of New Orleans. He was serving in Louisiana when Katrina came ashore, and assisted in hurricane relief during his tenure there.

He was ordained a bishop in 2003 after having served as a priest in the Archdiocese of New Orleans since his ordination in 1971.

Bishop Morin is a native of Dracut, Mass. He graduated from St. John Seminary, and was ordained to the priesthood in his home parish, the former St. Therese in Dracut.

The Pilot spoke to Bishop Morin about the impact of Hurricane Katrina five years after the storm came ashore and the progress of rebuilding efforts.

Q: A lot of public attention from Katrina has focused on New Orleans. How has the hurricane impacted Mississippi?

A: There was tremendous devastation in coastal Mississippi. The Diocese of Biloxi begins at the Louisiana border and extends all the way to Alabama. About 26 miles of it is coastline, so Ground Zero for the storm was really around this side of the border. It particularly wiped out stretches of the property along the coast. When you drive along Beach Boulevard (U.S. Highway 90) now, you see stretches where there is nothing but vacant land or slabs where houses had been. The flood damage was most extensive from the beach front north towards Interstate-10, and then the land elevation is a little bit higher. Beyond that, there was wind damage. The storm made land in Mississippi. New Orleans dodged the bullet on this one because what looked like a Category 5 or a 4 heading for New Orleans veered off a bit and hit Mississippi. The signs of the devastation are apparent even though there has been a tremendous amount of rebuilding over the years.

Q: In many ways, public attention has shifted away from Katrina and is now focused on the impact the oil spill is having on coastal waters and land. However, the Gulf Coast is still dealing with the impact left by Katrina. What still needs to be done, especially on the Mississippi coast?

A: We did recovery work and disaster relief. The Church was a key player in terms of helping individuals and families. In terms of emergency disaster relief, the Church's activity was extensive. That was thanks to the special collection the bishops took up in churches in the United States, and a second collection -- which was unheard of -- in order to help with the costs of rebuilding. The human services aspect, that obligation we feel to do the corporal works of mercy, was pretty well met and was downsizing over the last year and a half.

When the oil spill came along, we had another significant economic impact in terms of employment and businesses along the Gulf Coast because of the fishing and seafood industry. Those in the seafood industry were not allowed to take out their boats, so those who supplied them found their businesses drying up. The damage to the shoreline has not been that evident. I have driven along the coast, and while there were some reports of oil slick hitting the beach sand, there was not a great deal of oil hitting the beach. We have resort areas along the beach, and you had people who had reservations and were planning vacations. The media representations of it made it sound as if the Mississippi beaches were covered with this oil slick, so people started canceling. In some places, 40-50 percent of business had dropped off. It was the second significant impact in a five-year period of time.

Q: How has the Catholic community in Mississippi and around the nation responded to the Diocese of Biloxi and the impact of Katrina?

A: The response to Katrina has been an exemplary outpouring of generosity, both in terms of the collections that were taken up nationwide and also significant contributions of Catholic Charities USA. In both instances, the local charitable empathies affiliated with the Church were able to do a tremendous amount of work with the financial assistance of the American Catholic community. National groups make significant grants because what happened was the total amount of insurance coverage that was in place was only a fraction of what was needed to make the local Church whole again. There has been an outpouring of volunteer services. We will, in September, dedicate a new church in Waveland, St. Clare, which had to be completely rebuilt from the ground up. In a cluster of parishes more towards the Louisiana border, we have a groundbreaking coming up. This has been a process and a year of dedications, rededications, and groundbreaking. The people have a marvelous energy in terms of continuing to maintain their commitment to rebuilding. St. Clare's will have a beautiful new church a number of feet off the ground because it is not far from the coast, and so will St. Thomas (the Apostle in Long Beach). The elevation where it is being built is significantly higher than the beachfront. We will not be totally rebuilt, because as has been necessary in New Orleans, schools have been consolidated where there might have been two, three or four elementary schools. The new construction is one elementary parochial school that takes the children from several parishes. In some cases where there have been two parish churches, there will be a new church with a new name. There has been some of that very difficult process of merging and coming up with a new entity and having people accept the fact that the place that was church to them no longer exists.

Q: Given Katrina and the oil spill, what still needs to be done in Mississippi as far as relief work is concerned?

A: Now they are talking more about the impact in terms of mental health and the need for counseling and supportive services. People are just finding themselves stressed out. They are pressed to the point of where they were just on the verge of getting everything back in working order, and all of the sudden you find yourself with a new challenge, and it's an economic challenge. I think there is a tremendous amount of optimism here. Everybody is talking about how much hope there is. We dedicated a new food bank just a few weeks ago that was made possible from some of the gifts we had received from Hurricane Katrina so that we have a warehouse where we keep supplies necessary for doing immediate disaster relief and also works as a warehouse for social services agencies, who at these times are seeing more people coming in asking for help with food assistance because of the problems with unemployment. The emergency assistance is a little bit more critical right now in terms of financial and food assistance. We have a good St. Vincent de Paul pharmacy here in Biloxi that not only serves the city of Biloxi but people in the diocese from neighboring cities and towns. There is an increase in the number of people who can't afford their medications. You have some low-income people and you have some poor people and you try to do as much as you possibly can for them. We take rebuilding projects as they come and we are doing as much as we possibly can do.

Q: How long do you expect recovery from Katrina to take before it will be fully accomplished?

A: From all that I have read, even the public jurisdictions who have been eligible for (FEMA) funding have found the projection is another five years. I remember when we started off in the immediate post-Katrina days in New Orleans, in our naivete we thought a year or two. They are five years after Katrina, and so are we, and not everything is done.