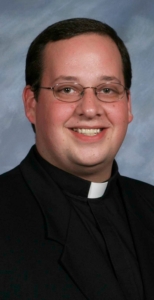 Born in Boston, Dec. 14, 1977 he was raised in Lowell in venerable St. Patrick Parish. He attended the parish grammar school and Dracut High School, before entering St. John Seminary College. On graduation from the college seminary he was assigned to theological studies at Rome's Gregorian University with residence at the Pontifical North American College.

Not surprisingly he told the Pilot that in addition to family support he saw in his parish priests examples of priestly zeal and service. Those at his home parish whom he mentioned, Father Richard "Doc" Conway and his parochial vicar at Lowell, Father Dan O'Connell; two other St. Patrick pastor's figure in his vocational equation: Merrimack Regional Vicar, Father Arthur Coyle and St. John, Wellesley's pastor, Father Tom Powers.

He served a summer internship at St. Patrick Parish, Watertown, and Archbishop O'Malley ordained him a deacon there before he returned to Rome to complete his seminary formation.

When he returned to the archdiocese in 2005, the archbishop ordained him to the priesthood at Holy Cross Cathedral on May 21, 2005. Father Poitras has a number of siblings: Pamela Lupien, Dracut; Brenda Martin, Lowell; Bruce, Billerica; Father Steven Poitras; and Marie Hemerle of Jacksonville, Fla. He returned to Rome to complete further theological studies and in April 2006 the archbishop named him parochial vicar at St. Agatha Parish in Milton.

At Milton, Father Poitras has been much involved with the young people of the parish and, in addition to his sacramental ministry, he cites his youth ministry work -- "introducing young people to Jesus Christ" as among the most fulfilling of his priestly duties.

Father Poitras, leaves his first and only assignment as an associate with gratitude to Father Peter Casey, the St. Agatha's pastor and the people he has served since his arrival as a newly ordained. "They have helped me become the priest I am today."

Since he heard the call to priestly life from Christ especially through other priests we asked him what to say to younger men pondering a vocation: "The strongest advice I can give to a young man contemplating a vocation to the priesthood is get to know the Master of the harvest. Spend time getting to know Christ as you would a friend, by spending time with Him in breaking open scripture and conversing with Christ in prayer. I have found that the better my friendship with Jesus, the master of the harvest, the better I am at working in his vineyard.''