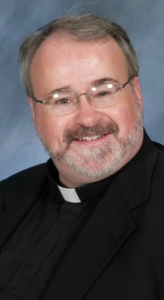 In some ways he'll be returning home. He was born on Sept. 18, 1960 in Methuen, though calls himself a Lawrence native and a son of the former St. Laurence O'Toole Parish, a graduate of the parish grammar school, Lawrence High School (1978) and UMass at Amherst (1982), Father Christopher Casey is one of the seven children of the late Cornelius and Mary (Donohue) Casey. His siblings are his sisters Ann Langlois, Amesbury; Mary Brouillette, Billerica; Shelia, Amesbury; and Sean, Newport, Vt. Two brothers, Cornelius and Timothy, are deceased. Cardinal O'Malley named his as pastor of Our Lady of Good Counsel Parish in Methuen effective Sept. 1, 2010.

Even though he was raised in Lawrence, he has moved home parishes several times and has met numbers of priests over the years. When St. Laurence closed he became a member of St. Mary of the Assumption Parish, then over to the coast at Star of the Sea in Salisbury and Immaculate Conception, Newburyport. It was from this last parish that he entered Blessed John XXIII National Seminary in Weston.

Following his seminary studies he was ordained at Holy Cross Cathedral by Cardinal O'Malley on June 5, 2007. He had served a deacon internship at St. Michael, North Andover and had celebrated his first Mass there. He was going back to familiar territory when he was named as parochial vicar of two Merrimack Region parishes: St. Francis of Assisi and St. Marguerite d'Youville, both in Dracut. Just this past June he had been transferred to St. Agnes Parish as a parochial vicar; he likely found that being busy in two parishes was nothing compared to being busy in St. Agnes.

As Father Casey relates "celebrating Mass, hearing confessions and serving people" are the most fulfilling aspects of his priestly ministry and whether it has been Dracut or Arlington and now Methuen these have been and will be the focus of his priestly ministry. Key influences on his vocation were the Augustinians Friars at St. Laurence O'Toole Parish and especially Father James Nolan, OSA.

While he regrets leaving St. Agnes after just a few months there he is looking forward to challenges at Our Lady of Good Counsel, he also is aware of the needs at Methuen and as he says, "I am only leaving because there seemed to be a need I could help meet in Methuen."