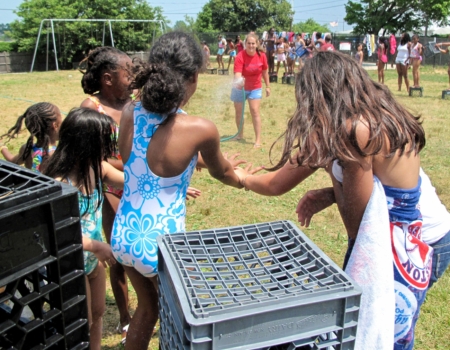 Counselor Maggie Holland, 18, sprays a group of campers with a hose at Sunset Point Camp in Hull during a relay race on July 12, a hot summer day. Sunset Point is an overnight camp for inner-city youth. Pilot photo/Jim Lockwood

HULL -- Last summer, some local inner-city youth had to make other plans when a summer camp they had attended in previous years was temporarily shut down.

"That was the worst summer of my life because we didn't have camp," said Misha McKoy, 15.

Jajuan Julian, 10, said he was "mad because I really like this camp."

Sunset Point Camp, a summer sleep-away camp in Hull for children and young teenagers operated by Catholic Charities, was reopened this summer after being shutdown last year due to lack of funding.

Tiziana Dearing, president of Catholic Charities, attributed last year's shutdown to the economic recession and an expired bequest. To reopen the camp, the staff rallied the local community and businesses for support.

"In this kind of new economy, the holy grail for sustainable funding is this model," Dearing said.

Community and corporate support enables campers like McKoy and Julian to escape inner-city life and bask in the ocean breezes of the South Shore. Campers arrive on Sunday and stay until Friday. In between, they participate in a wide array of summer activities.

"You get to try things you've never tried before," said McKoy.

McKoy said she went kayaking for the first time while at camp. Other activities she said she has done include pottery, dodgeball, and relay races.

"My day is awesome," McKoy said.

Evening activities include movie nights and a "Treasure Night" hosted by St. Mary of the Nativity Parish in Scituate where campers earn prizes competing in games in a carnival-like atmosphere.

Campers can make smores, and a local Knights of Columbus council runs an ice-cream social for them.

Chores are a part of the campers' day, with groups of campers participating in different tasks. A point system is used to reward good behavior and participation in team competitions. Awards nights are held to recognize the campers' achievements.

Unique Washington, 6, is in her second week at Sunset Point. She mentions arts and crafts and playing kitchen when recalling some of her favorite activities. However, she said she has made friends while she was there.

"I liked it when we first got here we got to tell people our names," she said.

"I had to get used to being friends with people," she added.

The camp relies mainly on private donations. Beth Chambers, the camp's director, said that they charge a $25 registration fee for campers, but the cost to accommodate a camper for one week is $375. Chambers said the registration fee is "no barrier to coming."

In order to open this summer, the camp requested individual and corporate donations from the community. Campers and staff met with various South Shore parishes, including St. Ann Parish in Hull, and hosted a clam bake for donors.

"That became the village it took to bring the camp back this year," said Chambers.

"There were people in Hull who didn't even know about the place."

News of the camp spread to nearby communities, Chambers said.

Corporate contributions came from companies with a local presence.

The camp also hosted a clam bake for donors at $90 per ticket. This year the camp is in its 90th season of operation.

Chambers said that they never asked the local community for money before, but it was necessary to reopen the camp this year.

Last summer, when camp was shuttered, its youth had to go elsewhere.

Sunset Point steered campers towards other options, such as Salvation Army Camp Wonderland in Sharon and Camp Wing in Duxbury.

"When we were driving to Camp Wonderland, I asked him (the driver) to drop me off here (at Sunset Point)," Julian said.