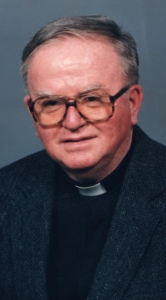 Central Regional Bishop Robert Hennessey was the principal celebrant and Father George Emerson, senior priest at St. Timothy, Norwood was the homilist at the funeral Mass for Father James J. O'Rourke celebrated June 25 at St. Columbkille Church, Brighton. A priest of the archdiocese since his ordination on Feb. 3, 1958, he had been for many years a member of the St. James Society. He died after a lengthy illness on June 21 in Boston.

A Wakefield native he was the only son of the late James and Mary (Lally) O'Rourke, he is survived by his sister Eleanor Phalon, Waterbury, Conn. His other sister Mary Barsanti predeceased him.

He attended St. Joseph School, Wakefield, St. Mary High School, Lynn and following a year at Merrimack College he entered the archdiocesan seminaries. Archbishop Richard Cushing ordained him and assigned him as an assistant at St. Peter Parish, Lowell. Just a few years later he responded to the cardinal's call for volunteers for the fledging St. James Society and until 1972 served in South America. He returned to the archdiocese serving as an associate at St. Charles Borromeo, Woburn and at Blessed Sacrament, Jamaica Plain, where he was pastor from 1977-1980. He returned to the St. James Society and served again until 1988 when he was named parochial vicar at St. Columbkille, Brighton. During the next 20 years he was a fixture in the parish and a right hand man to the pastors serving the needs of the expanding Hispanic community in the Brighton area.

He was named a senior priest in 2008 as his health had been declining. Msgr. William Fay, current pastor at St. Columbkille spoke highly of his one-time associate and during Father O'Rourke's recent confinement to extended care facilities, visited him on a regular basis.