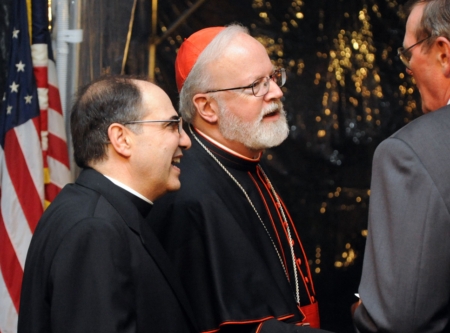 When he is ordained bishop, Peter John Uglietto will be the 35th auxiliary bishop of the archdiocese of Boston and only the second one who comes from a proud Italian American family. The episcopal ordination, which raises two archdiocesan priests -- Bishop-elect Arthur L. Kennedy is the other -- to the fullness of the priesthood, will be celebrated in the Cathedral of the Holy Cross, scheduled for the Solemnity of the Holy Cross, Sept.14.

Born in Cambridge on Sept. 24, 1951 he is the only son of Dolores (Ciampi) Uglietto and the late Salvatore who died last year. The bishop-elect has two sisters, both married, Linda Keating of Burlington, mother of Ryan, Michael and Julia; and Diane Coulter, mother of Alyssa and Halli all of Medway.

A son of St. Luke Parish, Belmont, he attended the parish elementary school before enrolling in the Archdiocesan Choir School at St. Paul Parish in Cambridge. From there he went to the Jesuit's high school in Boston, Boston College High School, from which he was graduated in 1969. In 1973 he was awarded a Bachelor of Arts degree from Boston College.

The fall of that year he was enrolled in St. John Seminary as a candidate for ordination in the Archdiocese of Boston, his seminary studies completed he was awarded a Master of Divinity degree. On May 21, 1977, Humberto Cardinal Medeiros ordained him to the priesthood at Holy Cross Cathedral. During his deacon year he had served at St. John the Baptist Parish in Quincy.

Between ordination and 1984 he was an associate pastor at three archdiocesan parishes: St. Francis Xavier, Weymouth; St. Gregory, in Boston's Dorchester neighborhood, and St. Margaret of Scotland, also in Dorchester.

He completed a Masters Degree in Christian Spirituality at Creighton University, Omaha, Neb. In 1986; subsequently he was assigned to pursue higher studies at the Pope John Paul II Institute for Marriage and Family Life (American Campus of Rome's Pontifical Lateran University) from which he eventually received both the Licentiate in Sacred Theology (1990) and the Doctorate in Sacred Theology (1996), respectively.

In addition to his educational experience, the bishop-elect has a variety of other accomplishments having worked in the archdiocesan Office of Spiritual Development (1979-1988) on the "speakers' circuit" giving parish retreats; he was also Adjunct Spiritual Director at St. John Seminary College (1985-1988) and during that same time coordinated the spiritual directors and retreats of the Archdiocesan Permanent Diaconate Program.

From 1990-1993 he was the Campus Minister at Regis College, Weston and from there he moved just a few miles up the road to Blessed John XXIII National Seminary, where he currently serves as rector. Prior to being named rector he served as professor of moral theology (1990-1993 and 1997-2010); Director of Field Education (1996-2001); Academic Dean (2001-2005) and since May 10, 2005 as Rector-President of the national seminary for second career vocations.

In addition to being named auxiliary of the archdiocese the bishop-elect has also been named the titular bishop of Thubursicum (in the old North African Roman province of Numidia -- present day Algeria). Following the ordination, Bishop-elect Uglietto will become the Regional Bishop of the North Region of the archdiocese, succeeding the present interim regional vicar, Father John Mulloy.