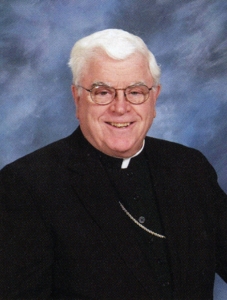 BRAINTREE -- One of Bishop Allue's observations about his service as auxiliary bishop here in the archdiocese is that he's moved his residence more than any other bishop -- or maybe any other priest! On the other hand a review of his resume or curriculum vitae indicates that this has been kind of his history even before coming to Boston in 1996.

Emilio Simeon Allue was born in Huesca, Spain on Feb. 18, 1935. His education, from elementary school onward, has been mostly in the Salesian family of which he is a member. Following elementary, secondary and early college and seminary studies he was assigned by the Salesians as a member of the New York Province in 1956. After serving in various apostolates of the Salesians, he went to Rome to complete his seminary theological formation. On Dec. 22, 1966 he was ordained to the priesthood in St. Peter's Basilica. In June of the following year he was granted a Licentiate of Sacred Theology from the Pontifical Salesian University in Rome. Returning to the United States he served in several provincial assignments of the Salesians: rector of the minor seminary, Goshen, N.Y. (1972-1975); pastor, Our Lady of Mount Carmel, New Brunswick, N.J. (1982-1989); pastor, St. Kieran, Miami, Fla. (1989-1992); rector of the Marian Shrine, West Haverstraw, N.J. (1992-1995).

When he was named Titular Bishop of Croe and auxiliary of Boston on July 24, 1996, he was serving the Hispanic population of Manhattan's Mary Help of Christians Parish.

Since his episcopal ordination on Sept. 17, 1996 he has served the archdiocese in many positions such as vicar general, Regional Bishop -- West (1996-2000); Regional Bishop -- Merrimack (2002-2008); Vicar for the Hispanic Apostolate (2008-present). During this time he has served on many archdiocesan boards, committees and commissions, and has been a member of the Presbyteral Council and the College of Consultors.

He has been a familiar face in parishes as he visits them during the regular round of confirmations or in the cycle of parish visitations. He has a good memory for names and the priests have come to respect his knowledge of their lives and interest in their ministry.

A Salesian through and through, he chose as his episcopal motto "Da mihi animas" (give me souls), a quote from St. John Bosco indicating his desire to work in priestly and episcopal service for the good of all and the ultimately goal of salvation.