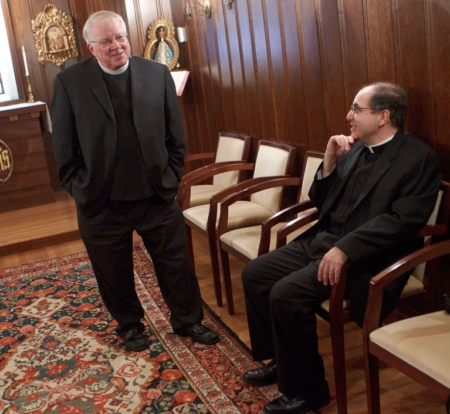 The two bishops-elect meet each other for the first time in the chapel of the Cathedral of the Holy Cross June 28. Until that day, the two rectors were not aware of the others' being chosen to become a bishop. Pilot photo/Gregory L. Tracy

BRAINTREE -- Becoming a bishop is a calling -- both from God and the pope. For one of the Archdiocese of Boston's newest auxiliary bishops, that call came while he was driving.

"I usually don't answer the phone on the highway," Bishop-elect Peter Uglietto said at a June 30 press conference at the archdiocese's Pastoral Center. However, he said, he answered his phone because it indicated that Cardinal Seán P. O'Malley's office was on the line.

"Did you ever try to take a U-turn on Rt. 30?" Bishop-elect Uglietto said.

He was told to report to the Cathedral of the Holy Cross to meet with Cardinal O'Malley. At the meeting that day, the cardinal told then Father Uglietto that Pope Benedict XVI had chosen him and one other priest to be an auxiliary bishop in Boston. The identity of the other candidate was not revealed to him.

Meanwhile, Bishop-elect Arthur Kennedy had received a similar phone call. Also sworn to secrecy, he too was not aware of the identity of the other auxiliary bishop.

It was not until June 28, two days before the public announcement that the two men first became aware of the other's appointment. They were both invited to lunch with the cardinal at the cathedral rectory.

Days after receiving his appointment, Bishop-elect Uglietto is still making sense of the reality.

"I feel like I'm dreaming and I'm waiting to go back to my normal life," he said.

That sentiment was evident in another way at the June 30 press conference. When asked whether he had selected an episcopal motto, Bishop-elect Uglietto said he had not, although he had formulated some options.

"I'm still trying to put one foot in front of the other," he said.

While Bishop-elect Kennedy had selected an episcopal motto, he experienced similar reactions to his fellow bishop-elect when he received notice of his new appointment.

"I was shocked," he said to the laughs of the press conference audience, which included other auxiliary bishops, clergy, lay staff of the archdiocese, as well as family and friends of both bishops-elect.

"I was quite taken aback by it because I hadn't anticipated anything such as this," Bishop-elect Kennedy said.

"It was both humbling and a sense of a call," he added.