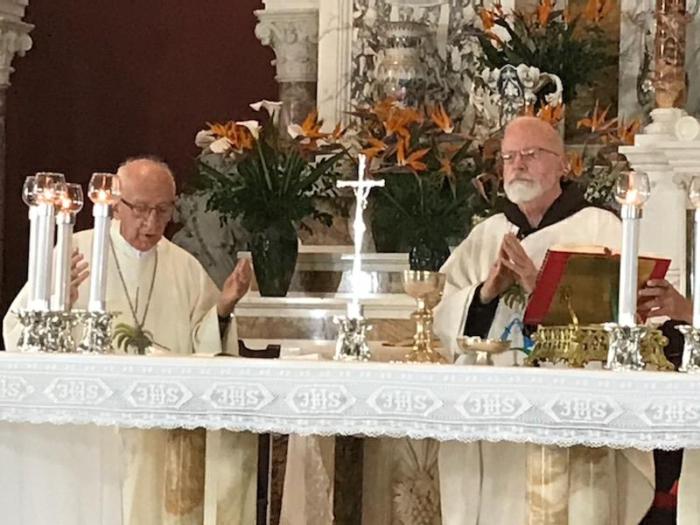 BRAINTREE -- Cardinal Seán P. O'Malley spent a whirlwind week visiting the people of the Dominican Republic, Haiti, and Cuba, meeting with religious and political leaders and seeing firsthand the impact of recent hardships in the different countries.

The cardinal had long been planning a trip to Santiago de Cuba, where he was invited to celebrate Mass for the Sept. 8 Feast of Our Lady of Charity of Cobre, the national patroness of Cuba. But after the earthquake in Haiti on Aug. 14, he decided to add a stop there.

"Knowing how our local Haitian community has been so greatly affected by this tragedy, I thought it would be an important opportunity for me to make this trip," Cardinal O'Malley said in the Sept. 10 post of his weekly blog, cardinalseansblog.org.

On Sept. 5, the cardinal traveled to Santo Domingo in the Dominican Republic with a group of doctors transporting medical supplies. The next day, he made the journey by helicopter to Port-au-Prince and Les Cayes.

Cardinal O'Malley and his hosts visited several churches that were destroyed by the earthquake. Locals told him about the threat of violence and their need for basic necessities, such as potable water, food, and shelter.

In his blog, Cardinal O'Malley admitted that he was "unsure of what is going to happen going forward in Haiti." However, he acknowledged the work of organizations like Catholic Relief Services and expressed hope that the special collections being taken up in dioceses across the country, including the Archdiocese of Boston, will raise funds the funds needed to help the people of Haiti.

"Through all this, the Haitians, as always, remain a people of great dignity, strength, character and faith in God. That's what gets them through these tragedies, which seem to come fast and furious at them as a people," Cardinal O'Malley said.

Upon returning to Santo Domingo, the cardinal had dinner with Dominican Republic President Luis Abinader and several other officials.

"It was very meaningful for me to be able to celebrate that Mass 51 years later in the shrine itself," the cardinal said.

The cardinal asked the president to "make it more possible" for Catholic Relief Services and Caritas International to send aid through Cuban dioceses' Catholic Charities organizations. He also expressed a wish for the Cuban government to have more direct contact with the bishops of Cuba.

Cardinal O'Malley and President Diaz-Canel also discussed the demonstrations that took place in Cuba over the summer, when people took to the streets to protest food and medicine shortages and demand greater access to coronavirus vaccines. Cardinal O'Malley appealed for clemency for demonstrators who were involved "in a nonviolent way."

In his blog, the cardinal described his meeting with President Diaz-Canel as "very cordial."

Looking back on the busy week in the Dominican Republic, Haiti and Cuba, Cardinal O'Malley reflected, "I have been associated with these countries for over 50 years, and it was wonderful to be able to see, meet, and pray with so many people."