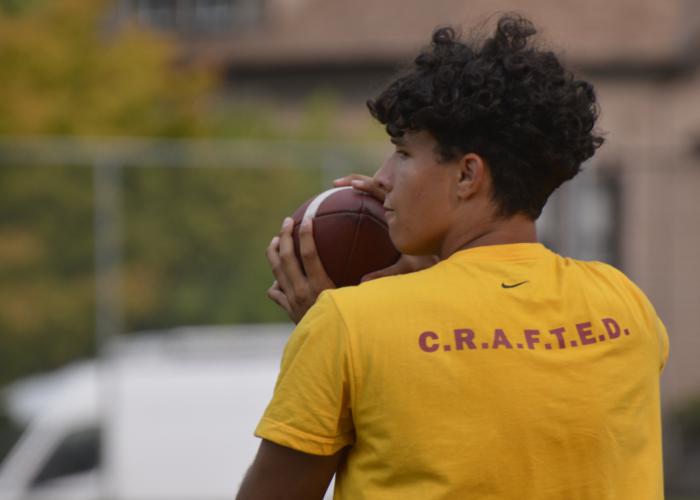 And that's all just since 2003 when Steve Pyne became the Rams' head coach.

So when all is said and done, what will the program's legacy be?

"I like to think we're giving kids basic life lessons and character values that they take beyond the field and apply to their everyday life," said Pyne, who also teaches at the school.

"Success is measured in a lot of different ways. The lowest common denominator for success to most people is wins and losses. For me, it's more about where are these guys in 15 or 20 years? What kind of husbands and fathers and community members are they? If they're doing well then and using some of the things we emphasize on a daily basis, that to me is success," he told the Catholic Sentinel, newspaper of the Archdiocese of Portland.

"That's what I hope our legacy is, well beyond winning games," he added.

Pyne acknowledged that the school has long had talented players and excellent coaches.

"Those things are cool and, don't get me wrong, I like to win. But it is not the focus of what we do at all. We do not talk about winning and losing. We don't set goals to win championships or anything like that," he said.

The parents want the program to be more than wins as well.

"Simply, we're going to do our best to prepare these kids for the challenges in front of them," Pyne said.

When the coach took over the school's football program, he thought it was his job to secure a state championship. The team had won league championships and made it to the quarterfinals in the playoffs.

"But we couldn't get past that," Pyne recalled. So he looked deeply at the team, its values and what they were about. He determined the focus was on winning. So he decided to change that.

Instead, he and the coaching staff put the players, their relationships and their experiences first. And the winning would come when it came.

At Central Catholic, King said, academics and work ethic are stressed, but more so he is proud to know he will walk away with life skills.

Grisham loves the people he meets on the field, pointing to King, his friend and teammate.

"Without football, I don't know that I'd be the person I am," Grisham said.

As he approaches life after high school, Grisham discussed what he has learned playing at Central Catholic.

"Coach Pyne," he said, "is always telling us to be a better man, to be an asset to people."

The school's football legacy extends beyond the current players.

TJ Salu graduated from Central Catholic in 2015. He then played football for the U.S. Naval Academy, graduating in 2020. Salu is now a Navy ensign, working as a weather specialist at Naval Base Coronado in San Diego.

He said playing football at Central Catholic affected him in many ways.

"Coach Pyne holds everybody to the same standard, the standard of excellence" on the field and in the classroom, Salu said.

Salu told of how he missed an early morning workout and got an earful from Pyne afterward.

"The standard he set for the program and all the players has really made that program successful throughout the years," Salu said.

Dedication to team counted just as much, he added, reflecting on the Rams' call-and-response greeting when they met and when they parted ways: "How we going to do it? Together! Count on me!"

"If you want to be successful (in football), you're going to need your brothers to your left and right to help you. It's not just going to be a 'you' thing," Salu said.

The same holds true in the Navy.

"'Together, count on me' is always in the back of my mind. When your chief says you've got to be up at 5 a.m. ready to roll, you don't want to be the guy sleeping in," he laughed. "It's just being a reliable, honorable person of integrity."

"We want to be crafted individuals," Pyne said. "If we're teaching these kids those values, we're going to have success."

Wolf is a reporter for the Catholic Sentinel, newspaper of the Archdiocese of Portland.