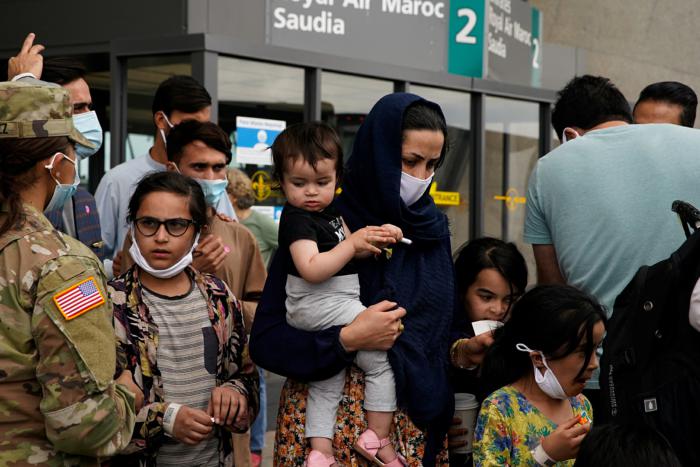 Afghan refugees in Dulles, Va., board a bus taking them to a processing center Aug. 29, 2021, upon arrival at Dulles International Airport. CNS photo/Elizabeth Frantz, Reuters

Not all 'eventualities' considered in Afghanistan withdrawal, pope says

BOSTON -- Catholic Charities is partnering with Combined Jewish Philanthropies to meet the needs of immigrants and refugees, this time with a focus on those fleeing Afghanistan after the Taliban's recent takeover of their country.

Marjean Perhot, Catholic Charities of Boston's director of Refugee and Immigrant Services, said that Afghan refugees have been coming to Boston for over 20 years. Catholic Charities has helped to resettle many Afghan families as well as interpreters who worked alongside the United States military.

This time, however, "it's going to be an increased number of people with some very acute needs, having just fled from a very difficult situation," Perhot said Aug. 30.

When it became clear that there needed to be "a community-wide response" to serve Afghans coming to Boston after the Taliban took control of Afghanistan on Aug. 15, Combined Jewish Philanthropies (CJP) offered to be a fundraising partner for Catholic Charities. The two faith-based nonprofits have a long history of working together on different issues, most recently in serving immigrants and refugees.

CJP does not provide direct services, but raises funds and organizes resources for partner organizations. In 2017, anticipating many changes in immigration legislation, they raised funds to help Catholic Charities meet the legal needs of the local immigrant community. Now, to help Afghan refugees, they have set up a Fund for Afghan Immigrants and Refugees (FAIR), whose proceeds will go toward Catholic Charities' immigration services as well as Jewish Vocational Service, which helps immigrants with employment-based needs.

"We are extremely blessed that CJP has reached out again and wanted to partner with Catholic Charities. I cannot underscore enough how much this means to us and to the people that we are going to serve," Perhot said.

She said she feels the partnership between Catholic Charities and CJP is "very unique and special," and that the Afghans coming to Boston "will be better served because of this joint partnership and what it says about our community, as a community of welcome, where two extremely large faith groups can come together for the common good of serving humanity."

Sarah Abramson, CJP's senior vice president of strategy and impact, spoke about the shared tradition of caring for the stranger that motivates the two organizations and the faith communities that support them.

"It's really a testament to the faith-based communities in Boston," she said.

"We don't just want people to be allowed here, we want people to feel that this is their home, and we want America to feel like we are better for the presence of diverse people from all around the world," Abramson said.

The second motivation, she said, is that they want to enable people to take action on issues that matter to them. She noted that it is "very disempowering" to see tragedies reported in the news and feel as though there is nothing one can do to help.

"One of the really special things between CJP and Catholic Charities is that we actually tell people no, you can do something about it," Abramson said.

She expressed gratitude to Perhot and Catholic Charities for their direct work to resettle refugees. She described Perhot's team as "tireless," recognizing that "it's very emotional, to work with people who are coming with absolutely nothing to a country in which they don't speak the language."

"They're not just an amazing partner, but a partner who is able to take the things that we care about, to take the resources that we can raise, and put them into action," Abramson said.

Perhot said Catholic Charities hopes to reactivate many communities that participated in the Parishes Organized to Welcome Refugees (POWR) program, and replicate that program for Afghans coming to the United States. In this model, parishes or groups of parishioners would sponsor a family, which would include obtaining housing for them and supporting them in housing for at least three months. Those interested in community sponsorships can email info@ccab.org.

Abramson said CJP has set a goal to raise enough money to resettle 25 families at $25,000 each.

"We know that this is an issue that is motivational to our community, and people want to take action, so we're enthusiastic about the ability to fund as many families as we possibly can," she said.

While their goal is ambitious, CJP and Catholic Charities have a history of successful joint fundraising. Abramson cited the example of the fund they opened in 2017 that raised $650,000 in three weeks. Even a small donation can add up when joined with others.

"It's a really powerful statement, that one person, if you join with other people, can really make a difference in people's lives," Abramson said.

More information about Catholic Charities' Refugee and Immigrant Services is available at ccab.org/refugee-services. Information about Combined Jewish Philanthropies' Fund for Afghan Immigrants and Refugees (FAIR) can be found at cjp.org/fund-for-afghan-immigrants-and-refugees.