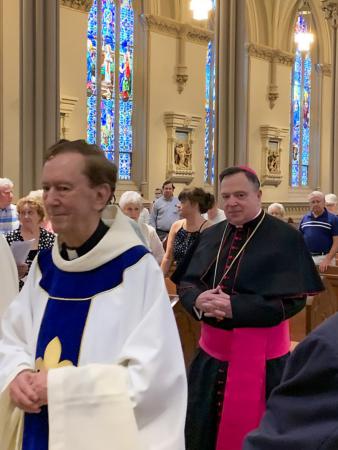 When COVID-19 began shutting America down in March of 2020, Lowell's Franco-American Day Committee was busy planning its 50th Franco-American Festival, including a gala 50th-anniversary celebration and its annual French Mass and June 24 raising of Quebec's flag at Lowell City Hall. Those plans were all postponed as weeks went by, the pandemic worsened, and finally, the 2020 Franco Festival had to be canceled. The committee stopped meeting and waited with everyone else for the development of vaccines that would make even a minimal 2021 Festival possible.

As the year 2021 began with everyone acclimated to social distancing, masking, and sanitizing regulations, and with vaccines beginning to be distributed in March, the committee ventured to start planning its traditional June 24 flag raising and a French Mass to be held on Sunday, June 27, in honor of St. John the Baptist at Lowell's Immaculate Conception Church.

Why flag raisings on June 24? Because June 24 is the Church's feast of John the Baptist's birth and a major public holiday in Quebec. Why does Quebec celebrate John the Baptist's birth as its official provincial holiday? Because he's the patron saint of Quebec, and Quebec's original French settlers brought with them from France their traditional summer solstice celebrations of his feast day.

The French Mass celebrated in June for Lowell's Franco Festival Week has always included the singing of a French hymn set to the melody of England's "God Save the Queen" and America's "My Country 'Tis of Thee." The hymn begins with a call to invoke the name of John the Baptist for protection and goes on to exhort attendees to begin anew the way mapped out by God -- the way proclaimed and paved by the Baptist.

Father Kenneth Healey, SM, who celebrated the Mass and delivered his homily in French, noted the Baptist's role in preparing the way of the Lord, and he urged attendees to follow John in evangelizing and announcing the Kingdom. Merrimack Regional Bishop Robert Hennessey, in attendance at the Mass, spoke to attendees in English at the end of Mass, stressing the importance of passing on to our children and grandchildren the ways of faith and prayer passed on to us by our own parents and grandparents -- in their language, if possible.

For a half-hour before the Mass, which began at noon, popular Franco-American singer Josee Vachon sang new and traditional French hymns that reconnected attendees with the prayerfulness of their youth and prepared them to celebrate Mass joyfully and attentively.

A bilingual Mass program helped attendees whose French might be rusty to understand the prayers of the Penitential Rite and the readings and prayers of the Liturgy of the Word. And Bishop Hennessey gave the final blessing with a certified relic of the Baptist.

Whatever the triggering factors, the 150-200 people in attendance listened carefully, responded whole-heartedly, and sang with enthusiasm. And when Mass ended, they mixed, mingled, and lingered until shooed away for an incoming baptism.