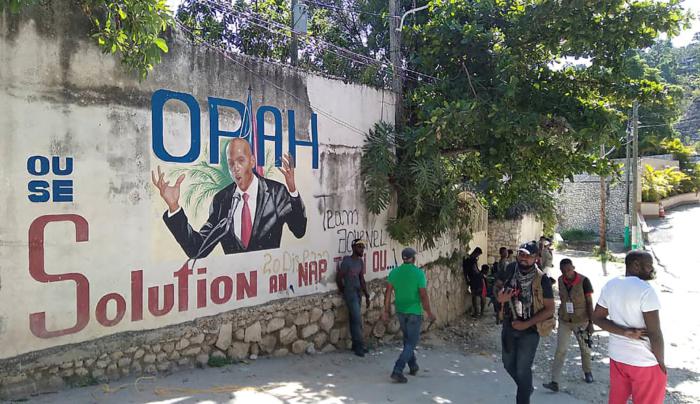 People walk past a wall with a mural depicting Haitian President Jovenel Moise in Port-au-Prince July 7, 2021. Moise was assassinated in an attack in the early hours of July 7 at his home outside of the capital, Port-au-Prince. CNS photo/Robenson Sanon, Reuters

MATTAPAN -- Our Lady of Mount Carmel Parish had just begun a novena leading up to their patron saint's feast day when Jovenal Moise, the president of Haiti, was assassinated by foreign mercenaries on July 7, further exacerbating the country's already unstable political situation.

"It's a very difficult moment for the Haitian community," said Father Garcia Breneville, the pastor of Our Lady of Mount Carmel, in a July 20 interview.

Two days after the parish's patronal feast, an interfaith prayer vigil for peace in Haiti was held at the church on July 18, with many local officials in attendance.

"We try to get together and to pray more, and to be aware of what's going on in the country. And then we try to do what we can in order to help people get through," Father Breneville said.

Haiti had already been experiencing political unrest and insecurity. Armed gangs control neighborhoods, and kidnappings and assassinations are common. According to Catholic News Service, 13,000 people have been displaced due to fighting among gangs.

"President Jovenal Moise is just one of the victims of what is happening in Haiti. But, as he's our president, we never thought that he would experience such crime," Dr. Marie Philomene Pean said on July 16, just over a week after the assassination.

Pean is the former pastoral associate at Immaculate Conception Parish in Everett, and is still very engaged with the local Haitian community. She provides news and spiritual resources through Pi Ayiti ("Pure Haiti"), a platform for publishing Christian materials in the Creole language.

Noting that the coronavirus kept people in quarantine, Pean said that people in Haiti are still quarantined, unable to leave their homes without risking being kidnapped or killed.

"A long time ago, when we Haitians had troubles, people would go outside and demonstrate and protest, because, they would say, life was too expensive, but right now there are just gangs. So if you go out and protest they kill you," she said.

Meanwhile, Haitians in the U.S. must weigh the dangers of visiting their home country.

"It's hard, right now, we who are living in the diaspora. We cannot go to our homeland. It's sad for us," Pean said.

As a hospice chaplain, Pean meets many Haitians working as certified nurse assistants. So, after visiting a patient and their family, she asks the CNA how they are doing, further extending the visit so she can listen and comfort them.

Father Breneville spoke of the resilience of the Haitian people, who have dealt with "challenging moments" throughout their history.

"The Haitians can cry and sing and dance at the same time. That is our life. We usually mix joy and sadness all together, we used to. That is the base of our resilience as a people," he said.

Father Breneville and Pean both spoke of the need for dialogue to address Haiti's sociopolitical and economic problems.

"One thing (that) could be very important for us is to try to understand, try to listen to the people, especially to those who suffer," Father Breneville said.

Pean said there is a need for justice for the president and his family. She said that Moise had been trying to do good things for the people of Haiti, like creating irrigation for farmers and making electricity available all the time instead of just a few hours a day. Pean thinks the elite class, which makes up about 5 percent of Haiti's population, felt betrayed by him.

Standing with the poor, she said, is "like signing your death sentence."

Pean expressed a desire for Haiti's elite class to be willing to listen to and live with the rest, investing in the country's infrastructure, agriculture, and education. She also voiced the hope that different ethnic and cultural groups living within Haiti might stand in solidarity with the Haitian people.

"We cannot be a whole person if we are not in solidarity with others. And that's the message of our Gospel," she said.

"It's not easy to be in touch with those who suffer, but if we can do that, that would be a good method, to do something truly efficient for the country," Father Breneville said.

Pean said if people want to help Haiti, what they need is not money, but voices speaking out. So far, the Haitian bishops conference had not said anything about the president's assassination, although Pope Francis offered his condolences.

She said Catholics in the United States and around the world can help them to claim that Haiti is not just for the 5 percent, but for all Haitians.

"If they want to help us, we are not asking for money, but we're asking for their voice," she said.