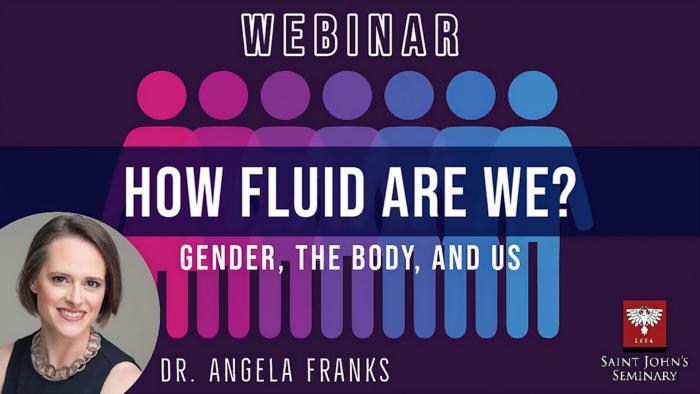 The title screen from the April 20 online presentation, "How Fluid Are We? Gender, the Body, and Us" given by Dr. Angela Franks, a professor of theology at St. John's Seminary. Pilot screen capture

BRIGHTON -- What is fluidity, and why is it so highly valued in the current culture -- particularly in connection to gender? These were some of the questions that Dr. Angela Franks, professor of theology at St. John's Seminary, addressed on April 20 in a webinar presentation entitled "How Fluid Are We? Gender, the Body, and Us."

Drawing on Scripture, philosophy, and sociology, Franks presented "a big picture concerning our cultural love of fluidity" by closely examining the term itself.

Guiding her talk, she said, was her belief that "all people desire the good."

"That doesn't mean that we always land on the good. We often get very confused about what's good, but we do desire the good," Franks said.

Based on this conviction, she raised the questions: "Is there a good desire in modern fluidity? And do we seek it correctly these days, and if not, how can we seek it better?"

Liquids, or fluids, change when subjected to stress, flowing around obstacles and out of the way of force. Solids, in contrast, either maintain their shape or are shattered. In this sense, fluidity is considered a strength because of its flexibility.

"The corollary of that newfound freedom is also a deep anxiety. People don't know who they are. And so, the question of identity has become more and more paramount," Franks said.

Gender fluidity is one example of this, she said, as it seeks to replace the male-female binary. She pointed out the contradiction between gender fluidity and the "gender essentialism" seen in most transgender discourse, which often presents stereotypes as models for maleness and femaleness. People have started to reject these models for the narrative of fluidity in gender.

Looking at the question of why people are drawn to movement -- for instance, the thrill of running up and down hills -- Franks made the argument that "motion is basic to us. Motion marks our nature." Yet, at the same time, "We're also marked by stability through change."

She examined what the Scriptures say about liquids, citing examples of both positive and negative descriptions and imagery. In the Old Testament, water is used to describe instability or vanity, and is sometimes associated with death. However, it is also essential for life, and so is used as a positive symbol by prophets like Isaiah and Ezekiel. In the New Testament, the Gospel of St. John gives particular emphasis to the idea that Jesus is the Living Water.

Franks pointed out that the Gospels portray Jesus constantly on the move and refer to his motion from and toward the Father. Franks called this Jesus' "vector-nature," coming from and returning to the Father. In John 14:3-6, Jesus calls himself the Way to the Father -- the personification of a movement. After the Resurrection, the disciples are caught up in his movement. At the same time, however, stability is also required.

"This motion of the disciples depends upon a remaining with Jesus, who remains with us as Emmanuel," meaning "God with us," Franks said.

Returning to the topic of human nature, she talked about the distinction that developed in the 1970s between sex and gender, explaining that "sex" refers to biological reality, while "gender" refers to cultural and experiential reality.

"It's a helpful distinction, because it enables us to say that there are two sexes that each contribute in a particular way to reproduction, but quite a bit of variation in how people live out those two sexes," Franks said.

However, she added, once that distinction was made, it "got lost in absurdities." Gender was divided from sex, and sex was divided from the body. As a result, Franks said, "we're now asked to be totally forgetful of the basic reality of reproduction," and in that case, "there's really no need for there to be a sexual binary."

She advocated for a new term, "sex lived-out," meaning how a person lives out their maleness or femaleness.

"There's my femaleness, and then there's how I live it out, which is really what gender is supposed to be about," Franks said.

She said that while the language of fluidity is somewhat appropriate for this living out, "it's only because we have a stable nature that we're actually capable of this fluidity."

From a Christian perspective, Franks said, human beings have what she termed "vertical flow," since they come from God and are returning to God. The problem, she said, is "the 90-degree turn," when human beings' "vertical" orientation towards God and movement towards completion is instead turned "horizontal" toward something that is not transcendent or infinite.

"These are very powerful basic realities that we're trying to bend towards secular directions, and it just doesn't work," Franks said.

She said that when human beings' fluidity is not ordered towards a transcendent end, it becomes "very chaotic."

"We need God, as our transcendent goal, to put order to our desires and our flow. And when we don't have that goal anymore, then we just kind of flow any which way," she said.

Franks drew on Pope St. John Paul II's insights about the purpose of the human body, which is to express the human person. She then talked about the goal of integrating different levels that make up a human being -- physical, chemical, biological, social and emotional, and, finally, loving and rational.

She suggested that transgenderism can be seen as a failure of integration, since it implies that the body is the enemy of the soul, and that if the outside is changed, the inside will change.

"That's not how integration works. We don't flourish by getting in and messing with the lower levels. We flourish by integrating them, not by rejecting them," Franks said.

Contrary to trans theory, which suggests that biological sex begins at higher levels, such as the psychological or rational level, Franks said biological sex is determined on the level of biology.

"We need to be clearer on where maleness and femaleness is located," she said.

Furthermore, she said, maleness and femaleness are not pathologies, but rather are "a sign of a healthy human being."

Franks said that human reason and freedom should be used, not to force changes on the healthy lower levels, but to integrate them.

"The fluidity is based upon this desire that we have for the infinite God. And so that's something that needs to be fulfilled, not stamped out," she concluded.

At the end of her virtual presentation, Franks answered questions from the audience and shared recommendations for videos, articles, and other resources related to gender and identity, including some of her writings for Communio and Catholic World Report.

The webinar "How Fluid Are We? Gender, the Body, and Us" can be viewed at www.youtube.com/watch?v=7MN-k10HarA.