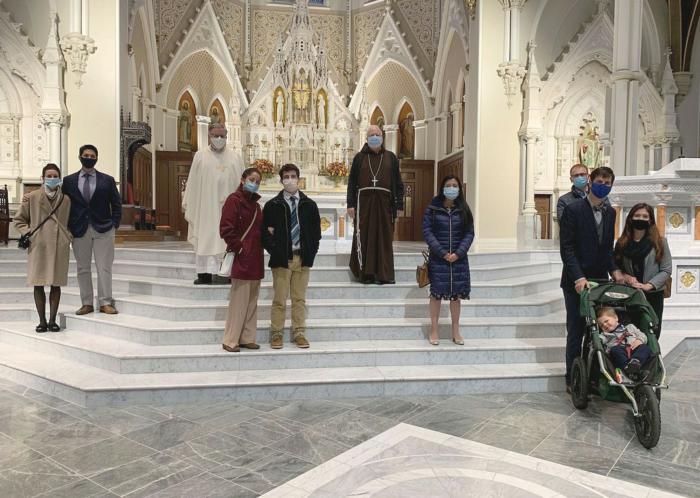 Cardinal O'Malley poses for a photo with some physicians at the Cathedral of the Holy Cross, where he celebrated the White Mass. Pilot photo/CardinalSeansBlog.org

During our recent board meeting of Pope St. John XXIII National Seminary, Maryann McLaughlin, the co-director of our Worship and Spiritual Life Office, mentioned that they had a Cursillo Ultreya meeting coming up. I said I would love to participate, and so they sent me the Zoom link to join them last Friday.

The Ultreya is a monthly meeting for Cursillistas, those who participate in the Cursillo Movement. The Cursillo Movement was started in Spain about 70 years ago, and it has been a wonderful influence in the life of the Church and a conversion experience for many lay Catholics and others. It is often the first time in their adult lives that they are able to receive catechesis that encompasses the life of grace, the sacraments, the mission to evangelize, and the deep sense of unity that are the core of the Church.

Father Bill Murphy was with us for the Ultreya and gave a talk. I also shared some remarks and had a time of dialogue with them.

I told them how, when I was in the seminary getting ready to go to South America (or so I thought), I made a Cursillo. In those days, there were no Cursillos in English; they were only in Spanish. It was an extraordinary experience, where I met all kinds of wonderful people who became a big part of my life and who have gone on to be deeply involved in the life of the Church, giving wonderful witness through their faith and service.

One of the persons whom I met on the first Cursillo that I made was Rafael De Los Reyes. He was then a young man who had been on the Cuban Olympic basketball team. On one of the team's trips to the Soviet Union, the plane landed in Ireland to refuel, and they allowed the team to get off. In the airport, he met a number of young Irish people who asked him what Cuba was like. He told them, "Oh, it's a paradise of the workers! It's a wonderful place, and I'm so happy there!" Then, as soon as the soldiers weren't looking, he turned to the people and said, "It's an awful place. I want to escape. Please help me!" So, they took him to the police. The police called Dublin, and the government said, "Lock him in a cell until the plane takes off again." So that's what they did.

He ended up in America and made that Cursillo. Today, he is a deacon working in Miami and is very much involved in their Divine Mercy Shrine.

And that's just one story. There were so many people who made the Cursillo at the time who have gone to assume leadership roles in the Church, their parishes and in different ministries.

I very much enjoyed our gathering, and I was so happy to see that the Cursillistas are still able to get together, at least virtually. The Cursillo Movement has made such an impact in the life of the Church all over the world, and in the United States, it has been an extraordinary way to promote lay leadership.

We were very pleased to be joined by several members of the Guild, including Guild President Dr. John Barravecchio, and Guild Secretary Dr. Sylvia Mary Yuet Ooi.

We were very pleased that Father George Salzmann brought a group of medical students from Harvard Medical School to be with us, as well.