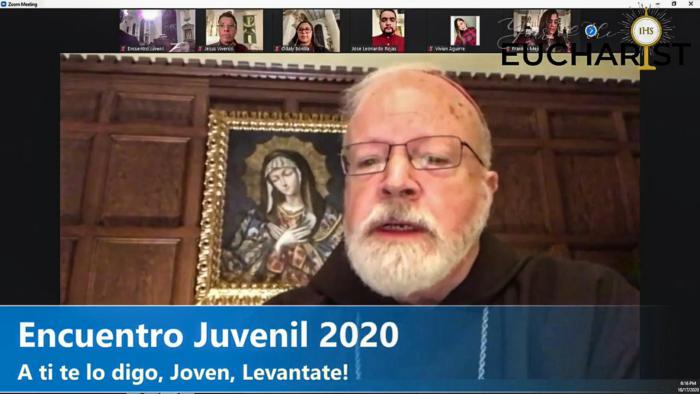 Last Thursday, I had a virtual meeting with benefactors and supporters of FOCUS campus ministry. They asked me to share some of my experiences of having the FOCUS missionaries here in Boston.

Of course, I noted the large student population we have here in the Archdiocese of Boston and how successful the FOCUS missionaries have been in campus ministry. I also said how impressive it is, not only to see the evangelization that they undertake but also the transformation in the lives of the missionaries themselves, which prepares them to be leaders in the Church. Certainly, many of them will go on to embrace vocations to the priesthood or religious life, but all of them will be very much involved in leadership roles in their parishes and in the life of the Church in the future.

On Friday, we had a meeting of the Board of Trustees of the Catholic University of America.

CUA has had to make many adaptations due to the coronavirus pandemic, which has created challenges for institutions of higher learning throughout the country, but they are committed to doing all they can to keep CUA moving forward.

On Saturday evening, we had our Archdiocesan Encuentro Juvenil for Hispanic youth in the archdiocese. In the past, we've held this gathering close to Christmas, but this year they decided to move it up a bit and, due to the pandemic, hold it virtually.

As with the in-person event, the three-hour gathering featured inspirational music and a number of witness talks.

I gave the opening prayer and remarks, and there was also a special guest appearance by the actor Eduardo Verastegui.

We are very grateful to Natalia Pellicano, Deacon Franklin Mejia, and Sister Elsa Rodriguez for all their hard work in helping to bring this gathering together.

On Sunday, we had our annual Red Mass for those involved in legal professions at the Cathedral of the Holy Cross. The tradition of holding a Red Mass goes all the way back to the Middle Ages and is held at the beginning of the judicial year, calling on the Holy Spirit for guidance and wisdom. It takes its name from the red vestments worn by the priest for the Mass of the Holy Spirit and also from the red robes that were worn by judges in England and France, where the custom originated.

A number of officers of the Catholic Lawyers Guild were with us for the Mass, and we were very happy that, once again this year, Father George Salzmann joined us with a group of students from Harvard Law School.

Last Sunday's Gospel was very appropriate for the Red Mass. It was, of course, the Gospel in which Jesus is asked about whether it is permissible to pay taxes. He takes a coin, points out the image on it and says, "Render unto Caesar what is Caesar's and to God what is God's." So, in my homily, I spoke about the fact that the coin bears the image of Caesar, but every human being bears the image of God, and that is the basis of our Catholic social teaching.

As much as we look forward to once again holding these gatherings in person, we are very pleased that they are continuing on, at least virtually, to help our young people discern if they are being called to a life of service to God's people.