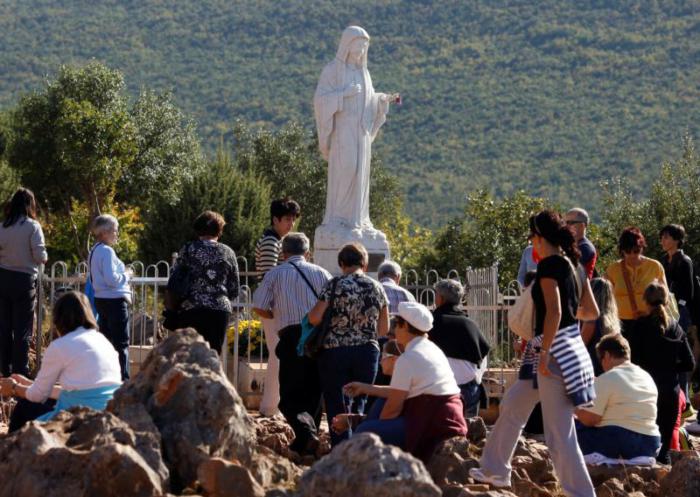 Pilgrims are pictured in a file photo surrounding a statue of Mary on Apparition Hill in Medjugorje, Bosnia-Herzegovina. (CNS photo/Matko Biljak, Reuters)

Mary will always be "the great model of the church" because she is ready to follow Christ with vitality and docility, he said in a message to those attending the festival Aug. 1-6 in Bosnia-Herzegovina.

He said, "her 'yes' means getting involved and taking a risk, without any guarantee besides the certainty of being the bearer of a promise," and her example continues to show the beauty in freely entrusting oneself completely to the hands of God.

"May her example captivate and guide you!" he said.

The pope's message, released to journalists Aug. 2, was read at the festival Aug. 1. Though it was the 31st edition of the annual festival, it was the first time a papal message was sent to the event after it became an officially approved church festival in 2019. That approval came three months after Catholic pilgrimages to the site in Bosnia-Herzegovina were authorized by the pope.

While an estimated 40,000 to 45,000 people attended the festival last year, including senior Vatican representatives for the first time, organizers were unsure how many people to expect in 2020 because of travel restrictions and safety measures in place due to the COVID-19 pandemic.

In mid-July Bosnia-Herzegovina opened its borders to citizens of the European Union and Switzerland on the condition that they present a health certificate certifying they tested negative for the coronavirus not more than 48 hours before entry into the country. Citizens of neighboring Croatia were exempt from taking the test.

Before the pandemic, the shrine annually attracted up to 3 million people -- with foreign visitors making up the bulk of those numbers.

Pope Francis said in his message that Mary is the mother watching over her children who are journeying through life, often tired and in need, but yearning for that light of hope that never goes out.

He said the festival was an "opportunity to encounter Jesus Christ," especially in the Eucharist and in the sacrament of reconciliation.

Young people can discover "a new way to live, different from the one offered by a culture" where everything is temporary, nothing is definitive "and the only thing that matters is enjoying the present moment."

"Do not be afraid!" he said. "Christ is alive and desires that each of you live."

Keep one's gaze fixed on Christ, he told young people, and take the time to be with the Lord in prayer.

The festival, he said, was an occasion to "come and see" the Lord, to experience his presence and become real witnesses of Christ.

More than 40,000 apparitions have been claimed over 38 years at Medjugorje, where six teenagers reported first seeing an apparition of Mary June 24, 1981.

Some of the visionaries say Mary still appears to them daily with messages.

In May 2018, Pope Francis named Archbishop Henryk Hoser as apostolic visitor to Medjugorje after a papal commission recommended that Medjugorje be designated a pontifical shrine with Vatican oversight.

A ban on pilgrimages organized by Catholic dioceses and parishes was lifted under a papal decree in May 2019.

Archbishop Hoser said in August 2019 that the pope had "opened a great door to enter Medjugorje" with the decree, adding that he was "personally and intimately convinced" the Marian center offered "a model for new evangelization."

He said Medjugorje should be seen as "a living, dynamic reality," with over 700 vocations so far recorded there, adding that the center's importance was summed up "by the people coming here, praying here, being transformed here and returning to their countries with the Gospel spirit they breathed here."

"The fact apparitions are still continuing is the main obstacle to a final ruling, since it's hard to decide on something which hasn't finished. For now, the question of recognizing the authenticity of the apparitions remains in the hands of the Secretariat of State," he said at the time.