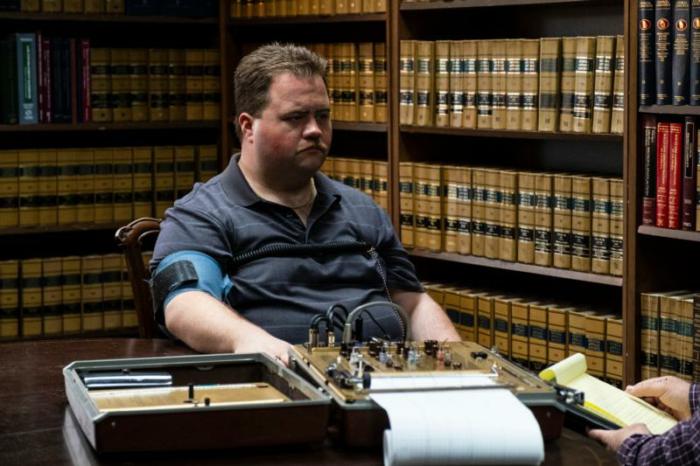 NEW YORK (CNS) -- The following are capsule reviews of theatrical movies on network and cable television the week of Aug. 2. Please note that televised versions may or may not be edited for language, nudity, violence and sexual situations.

Monday, Aug. 3, 5:30-8 p.m. EDT (Showtime) " Seabiscuit" (2003). Fact-based Depression-era tale chronicling how Seabiscuit, a temperamental, bargain-basement racehorse, was transformed with the support of his patient owner (Jeff Bridges), resourceful trainer (Chris Cooper) and scrappy, hard-luck jockey (Tobey Maguire) from an ungainly loser to a racetrack record-setter whose hard-won triumphs lifted the spirits of the struggling American populace. Writer-director Gary Ross condenses Laura Hillenbrand's same-titled best-seller into a feel-good story marred by some heavy-handedness but buoyed by classy period visuals and deft performances. An implied sexual encounter, brief racetrack and boxing ring violence and some profanity. The Catholic News Service classification of the theatrical version was A-III -- adults. The Motion Picture Association rating was PG-13 -- parents strongly cautioned. Some material may be inappropriate for children under 13.

Tuesday, Aug. 4, 8-10 p.m. EDT (TCM) " In the Good Old Summertime" (1949). Pleasant musical version of " The Shop Around the Corner" is set in an 1890s Chicago music store whose head salesman (Van Johnson) and a new saleslady (Judy Garland) nurse their mutual dislike until each discovers the other is the lonely-hearts pen pal they have grown to love. Directed by Robert Z. Leonard, the romance is abetted by the charming period setting, some agreeable songs and the cheerful antics of the shop's owner (S.Z. Sakall) and his befuddled nephew (Buster Keaton). The Catholic News Service classification of the theatrical version was A-I -- general patronage. Not rated by the Motion Picture Association.

Friday, Aug. 7, 6-8 p.m. EDT (TCM) "Fury" (1936). Mistaken for a murderer, an innocent man (Spencer Tracy) escapes a small-town lynch mob and, despite his loving wife (Sylvia Sidney), becomes an embittered criminal obsessed with revenge. German director Fritz Lang's first Hollywood effort is a powerful picture of ordinary Americans struggling to survive hard times and hardened hearts during the Depression, though it falters in a melodramatic conclusion. The lynching sequence is a harrowing but classic portrayal of irrational mob violence. The Catholic News Service classification of the theatrical version was A-II -- adults and adolescents. Not rated by the Motion Picture Association.

Saturday, Aug. 8, 8-10:13 p.m. EDT (HBO) "Richard Jewell" (2019). Director Clint Eastwood's sympathetic profile of the titular security guard (Paul Walter Hauser) who quickly went from hero to villain in the public mind when he was accused of planting the three pipe bombs that he himself first discovered, and helped to save people from, during the 1996 Summer Olympics in Atlanta. Dogged by an FBI agent (Jon Hamm) convinced of his guilt and a relentless mob of journalists led by a newspaper reporter (Olivia Wilde) who's out for a sensational story at any cost, he turns for help to his former boss, a maverick attorney (charismatic Sam Rockwell). The canny, hard-bitten lawyer and his naive client make for an interesting odd couple and Kathy Bates is in fine form as Jewell's doting mother. But a seamy subplot and other factors make Eastwood's fairly gripping film, which draws on both a book and an article, best for grown-ups. An implied nonmarital encounter, brief violence, mature references including to homosexuality, about a dozen uses of profanity, frequent rough and crude language. The Catholic News Service classification of the theatrical version was A-III -- adults. The Motion Picture Association rating was R -- restricted. Under 17 requires accompanying parent or adult guardian.

Saturday, Aug. 8, 9-10:30 p.m. EDT (Showtime) "Countdown" (2019). Occasionally effective horror story about a haunted phone app that tells victims exactly when they'll die. A plucky nurse (Elizabeth Lail) becomes the chief opponent of the demon (Dirk Rogers) behind it all, defending her younger sister (Talitha Bateman) with the help of a quirky priest (P.J. Byrne) whose methods are occult rather than Catholic. Though writer-director Justin Dec's film is quite clearly aimed with precision at teens, the amount of vulgar talk included in the dialogue precludes its endorsement for them. An occult theme, some gore, brief physical violence, a few profanities, frequent crude language. The Catholic News Service classification of the theatrical version was A-III -- adults. The Motion Picture Association rating was PG-13 -- parents strongly cautioned. Some material may be inappropriate for children under 13.