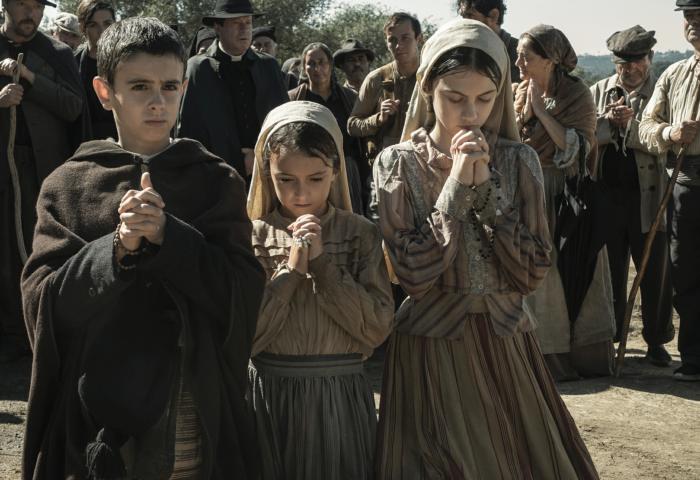 Jorge Lamelas, Alejandra Howard, and Stephanie Gil star in a scene from the movie "Fatima" that will premiere in Boston as a drive-in at Our Lady Comforter of the Afflicted Parish in Waltham on Aug. 9. CNS photo/Claudio Iannone, Picturehouse

Maureen Crowley Heil: Pray for Peace with Fatima and the Propagation of the Faith

WALTHAM -- Our Lady Comforter of the Afflicted Parish will host a drive-in screening of the new film "Fatima" on Aug. 9 to raise funds for the Propagation of the Faith.

The 2020 film "Fatima," distributed by Picturehouse, was originally set for release in March. The Propagation of the Faith planned to hold a screening in a movie theater, as they have for other films in the past. However, the film's release was postponed due to the coronavirus pandemic.

The film is now scheduled to be released in theaters nationwide on Aug. 14, the day before the feast of the Assumption. In the meantime, Picturehouse is organizing special drive-in screenings in major cities across the country. The first such drive-in was held in Miami on July 13, the anniversary of the third Marian apparition in Fatima, Portugal. Boston will be the last city to hold a drive-in, which will take place the weekend before the film's theatrical release.

This event will be the Propagation of the Faith's third time holding a movie screening as a fundraiser, but the first time they have organized it as a drive-in. Its previous screenings of faith-based films were held in movie theaters in Framingham.

Like many Catholic organizations and charities, the Propagation of the Faith has suffered financially due to the pandemic, which put many people out of work and hindered their donors' ability to support the missions.

"Our donors are the average Catholic in the pew, and so many people in the pews are hurting right now," explained Maureen Heil, director of programs and development for the Pontifical Mission Societies, in a July 20 interview.

"What do you do when you're low on money? You cut back on charitable giving. So, unfortunately, this has hit us really hard as well," she added.

In this context, she said, being presented with the opportunity to hold a fundraiser was "a real gift."

Directed by Marco Pontecorvo, "Fatima" tells the story of the Marian apparitions at Fatima through the eyes of Lucia dos Santos, the eldest of the three visionaries and the only one who lived to adulthood.

For the drive-in screening, Picturehouse is providing an LED screen, a trailer with four restrooms, and staff to sanitize the restrooms between uses. They are also planning the arrangement of the cars of people who register for the event, so that larger vehicles do not block the view of people in smaller ones.

"They've got this down to a real art form of how to pull it off," Heil said.

Bishop Robert Reed, president and CEO of CatholicTV, will act as master of ceremonies and lead a decade of the rosary before the film is shown.

Attendees will receive concierge boxes containing snacks and souvenirs, including a Fatima face mask and a World Mission Rosary.

Heil noted that the inclusion of the rosary is especially important because, at Fatima, Mary urged people to pray the rosary.

"We always feel like our mystery is the third Glorious Mystery, because that's the descent of the Holy Spirit. Without the Holy Spirit we can't evangelize," Heil said.

Heil said she hopes the event will not only help the Propagation of the Faith and the people who attend, but also spark conversations and spread the message of Fatima by word of mouth.

"This is a time for Fatima's message. I truly believe it. I think the world needs Fatima now more than ever," she said.

The screening will take place Aug. 9 in the parking lot at Our Lady Comforter of the Afflicted Church, which fits about 100 cars. An offering of $50 is suggested for each car. Attendees can arrive at 7 p.m. and the movie will begin at 8:30 p.m.

There will also be a raffle drawing for an all-inclusive pilgrimage for two to Lourdes and Fatima in the spring of 2021. Donated by Marian Pilgrimages, 250 tickets will be sold at $100 each, and the winner will be announced at the screening. All proceeds will benefit missionaries supported by the Society for the Propagation of the Faith.