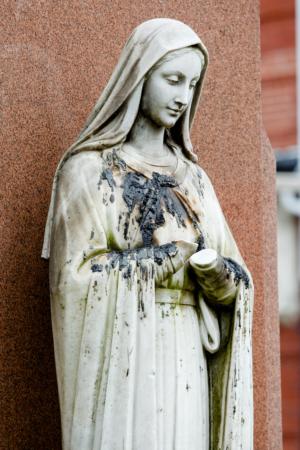 The statue of the Virgin Mary at St. Peter Parish in Dorchester was damaged by an arsonist July 12. The hands of the statue were also found broken off on the morning of July 15. Pilot photo/Gregory L. Tracy

Boston Police are investigating an arson attack against a statue of the Virgin Mary at St. Peter Parish in the Bowdoin-Geneva Section of Dorchester.

According to a post on the Boston Police Dept. website, BPDNews.com, officers responded to a call about a fire on Bowdoin Street at about 10 p.m. on Saturday, July 11.

Officers arriving at the scene found that the statue, which sits at the entrance of the Teen Center at St. Peter across the street from St. Peter Church, had been set on fire. Members of the Boston Fire Department Fire Investigation Unit said an unknown suspect had set fire to plastic flowers, which were in the hands of the statue.

As a result of the fire, the face and upper body of the statue were severely blackened, and the arms and hands were covered in charred plastic.

Since the initial arson attack, by July 15, there had been at least two incidents of private individuals attempting to clean the statue without the permission of the parish. The parish plans to have the statue professionally cleaned and restored.

At one point, between July 14 and the morning of July 15, the hands of the statue were broken off. It is unclear whether the additional damage was a result of an attempted cleaning by a member of the public or a further act of vandalism.

"My immediate thought was, looking at it, that a troubled soul did this, someone who's just not in a good place," St. Peter's pastor, Father John Currie, said in reaction to the damage.

The parish was to hold a prayer vigil at the site of the statue on the evening of July 15.

"Since it is Our Lady and our faith and our tradition, we have the beauty of the rosary, and Mary always bringing us to Jesus, we decided to gather as a community and pray the rosary, and to pray for this person, or people, whomever did this, and in praying for them let them know that we love them, we forgive them, and we're here to help them in any way that we can, if that's what they need. Because that's what Our Lady would want," Father Currie said.

Reporting by Jacqueline Tetrault, Pilot staff, contributed to this story.