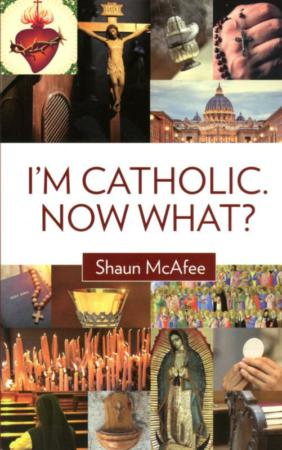 This is the book cover of "I'm Catholic. Now What?" by Shaun McAfee. The book is reviewed by Mitch Finley. (CNS)

These two books give readers an overview of what it means to be Catholic. They share the strengths and weaknesses that any such book is bound to have.

In other words, these books present a black-and-white view of Catholicism, as if no gray areas exist. They tend to overlook G.K. Chesterton's observation that Catholics know the relatively few "transcendental truths on which they do agree, and take rather a pleasure in disagreeing on all the rest."

That said, such books have their place and can be helpful.

Shaun McAfee, author of "I'm Catholic. Now What?" is a former evangelical Christian who joined the Catholic Church. This gives him the ability to speak to those with a non-Catholic background about Catholicism, knowing what their perspectives and questions are likely to be.

While Vogt's book limits itself to certain more-or-less controversial topics, McAfee's book addresses Catholic topics of many kinds, including the Bible and the Catechism of the Catholic Church, the sacraments, Mary and the saints, prayer, drinking beer, kissing a bishop's ring, opposing relativism, euthanasia, evolution, church history, and genuflecting and bowing.

Vogt became a Catholic as a young adult, but prior to embracing a Catholic doctrinal literalism similar to that of McAfee, he was a millennial "none." Vogt divides his book into nine sections: Answering Atheism, Evil and Suffering, Trusting the Gospels, Explaining the Eucharist, Abortion, Same-Sex Marriage and Transgenderism. Particularly appealing is that each of these includes an "expert interview" with an individual whom Vogt regards as an expert on that topic. These include Peter Kreeft and Jesuit Father Robert Spitzer.

One advantage of Vogt's "What to Say and How to Say It" is that it includes one of the few easily available popular theological discussions of transgenderism.

When it comes to issues on which there is considerable Catholic disagreement -- such as the morality of contraception -- McAfee embraces the official Catholic point of view with no mention of contrary beliefs. McAfee turns frequently to the Catechism of the Catholic Church so, in this regard, it would have been helpful had he at least remarked on the catechism's ambiguity on the topic of freedom of conscience.

Both of these books make good reading for both new and "cradle" Catholics. Readers do well, however, to remember that the authors wrote their books from a certain ideological perspective on what it means to be Catholic.

Finley is the author of more than 30 books on popular Catholic theological topics including "The Rosary Handbook: A Guide for Newcomers, Old-Timers and Those In Between" and "What Faith is Not."