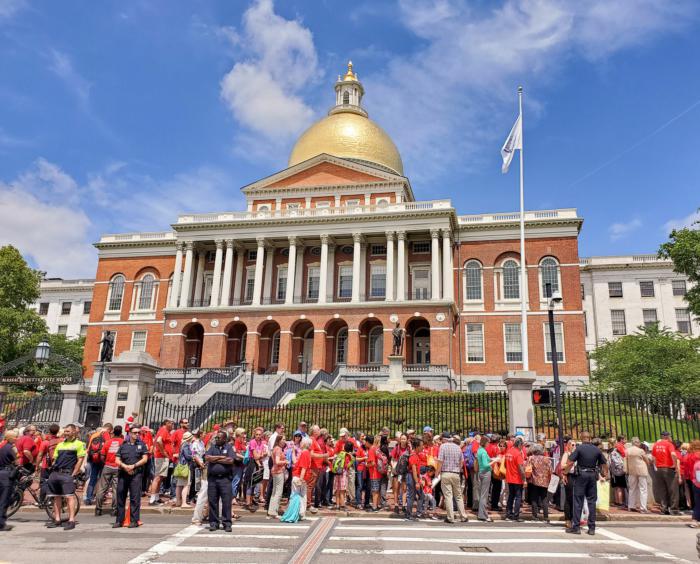 Pro-life supporters, dressed in red, line up outside the State House for a chance to be present for hearings on the proposed ROE Act held by the Joint Committee on the Judiciary in June 2019. The committee voted this week to extend the deadline to take action on the bill. Pilot file photo/Gregory L. Tracy

BRAINTREE -- The Massachusetts Legislature has extended the deadline to take action on the pending abortion legislation known as the ROE Act.

The ROE Act consists of two bills: House Bill 3320, "An act removing obstacles and expanding access to women's reproductive health," and Senate Bill 1209, "An act to remove obstacles and expand abortion access." The acronym for these bills, ROE, was the pseudonym used by the plaintiff of Roe v. Wade, the Supreme Court case that ended with the decision to legalize abortion in the United States.

If the proposed bills become law, they would allow abortions to be performed at any point during pregnancy, and provide state funding for women who cannot afford to pay for an abortion. They would also eliminate the legal requirements that late-term abortions must take place in a hospital, that a child who survives an attempted abortion must receive medical care, and that a minor must have parental or judicial consent to undergo an abortion.

Typically, the legislative session begins in January of odd-numbered years and ends July 31 of even-numbered years. Approximately 5,000 to 6,000 bills are filed each year, and each one has a reporting deadline for the committee to which it is assigned.

The ROE Act was assigned to the Joint Committee on the Judiciary, which was originally supposed to take action on it by May 12. However, on May 11, the House of Representatives voted to extend that deadline until July 31.

In light of the COVID-19 pandemic, it is possible that the legislative session may also be extended past its usual end date of July 31, according to Jim Driscoll, executive director of the Massachusetts Catholic Conference, which speaks for the bishops of Massachusetts on public policy matters.

He encouraged Catholics to contact the Joint Committee on the Judiciary to express their opposition to the ROE Act.