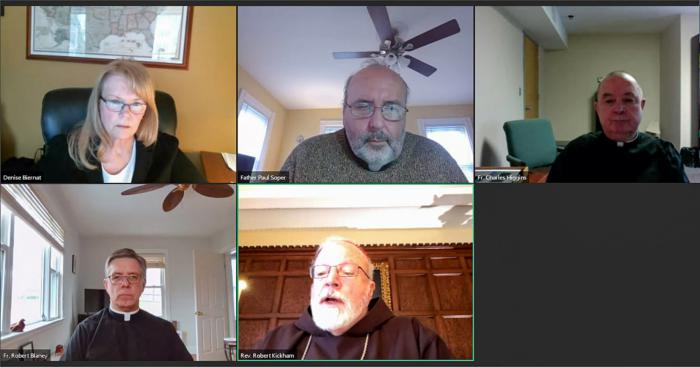 Those invited to the conference included priests, deacons, parish business managers and staff members, as well as parish council and finance council members. Within minutes of its start time, the conference exceeded its technical limit of 1,000 participants, with over 1,300 attempting to attend. However, organizers said a recording of the conference and copies of related documents would be sent to all those who had registered for the conference.

The overarching topic of the webinar was the financial impact of the pandemic on parish communities, whose revenues are suffering in the absence of weekly collections at Mass. Multiple speakers addressed the possibility of merging parishes in order to make them "fiscally viable."

In his opening remarks of the virtual event, Cardinal Seán P. O'Malley acknowledged that, at his request, Father Paul Soper, secretary of evangelization and discipleship, had been calling parishes over the previous two weeks to raise the option of merging parishes.

"Some people have shared their concern that the archdiocese is using a huge financial hardship to force mergers. I want to clearly state that we are not, and we do not intend to force mergers. We're working with parishes to prevent a situation where they close due to not being able to pay the basic operating expenses," the cardinal said, adding that "Unfortunately some parishes could find themselves in this situation during the coming months."

Chancellor John Straub spoke at length about the challenging financial situation parishes are facing and the resources that are available to them through the archdiocese. He emphasized the need for parishes to form long-term financial plans, looking forward, not just until the point of reopening, but at the next 12 to 18 months.

In the past, Straub said, parishes facing financial emergencies could appeal to a revolving loan fund, which is made up of parish savings accounts. This option is no longer available, since parishes are now relying on those funds for operating expenses.

Straub said that Massachusetts was currently in the "peak" of the pandemic, and that it took two months to reach that point. He said he thinks it may take just as long to begin resuming parish activities.

On April 21, Gov. Charlie Baker had announced that schools would not resume session for the remainder of the 2019-2020 academic year. Straub said schools should plan for the possibility of only reopening virtually in the fall. He also noted that schools are facing financial hardships because families are struggling to pay tuition.

Straub also spoke of possible measures that churches may need to take in the near term when they are able to reopen. Even when public gatherings are allowed, he said, new social norms and requirements of social distancing will still pose logistical challenges -- for example, protocols may need to be observed for seating, sharing materials, and distributing Communion.

Straub said the archdiocese's "90-Days Now -- For Your Parish" campaign raised $300,000 for parishes, which is not enough to make up for the difference in revenue usually earned from weekly collections. And even when Masses resume, Straub said, parishioners may not be able to contribute as much as they did before the pandemic, because of high unemployment and the looming prospect of a recession or depression.

Straub suggested that communities "Plan for the worst-case scenario (and) hope for the best."

Father Charles Higgins, pastor of St. Albert the Great and St. Francis Xavier Collaborative in Weymouth, shared reflections on what parishes are experiencing.

He suggested that parish leaders need to have a "wider perspective."

"I think that we have to be creative, we have to let go of old borders, and not only the borders of parish life, I mean the borders of our own personal mentality. How can we minister to the people in the archdiocese, in our own local parishes? By using the gifts and talents we have in our own present environment," Father Higgins said.

He added that, although this is "a very challenging time, I think it also can be a hopeful time. The Spirit of God has given to us this time to reform our Church."