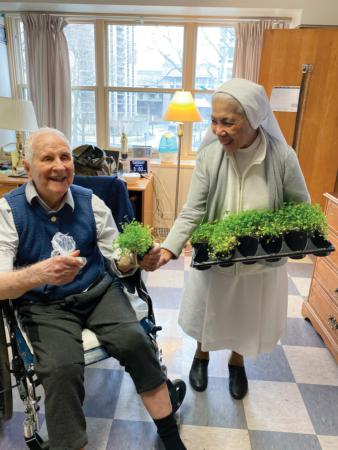 This week, following the recommended protocols for social distancing, I am celebrating Mass in the rectory of the Cathedral of the Holy Cross each day for all of our people, especially those who greatly desire to attend Mass but are unable to at this time.

The message I released this week, offering prayers for our heroic health care workers and all who are experiencing sickness during this time, can be found on my blog.

Tuesday was, of course, the feast of St. Patrick, the patronal feast of our archdiocese. Traditionally, the centerpiece of our celebration is a Mass at the Cathedral of the Holy Cross. In recent years, Msgr. Kevin O'Leary has arranged beautiful celebrations with bagpipes, step dancers, readings in Irish by students from Catholic Memorial and, of course, the blessing of the shamrocks that are distributed after Mass. And, of course, the Mass was always followed by a reception with tea, soda bread, and Irish music in the lower church.

However, because of safeguards that the government has imposed in the face of the coronavirus threat, this year's Mass was much simpler, and, thanks to CatholicTV, we were pleased that people at home could participate in this St. Patrick's Day tradition. Bishop Reed provided commentary for the Mass, which was broadcast live and then was rebroadcast later that night.

At the beginning of the Mass, I delivered a message to the people of the archdiocese, in which I called on people to pray the rosary, which has always been a powerful prayer of our Catholic people in times of war, famine, persecution, and sickness. I also encouraged people to have a sense of solidarity and to keep tabs on their friends, neighbors, and elderly people who are living alone.

The Mass was concelebrated by myself, Msgr. O'Leary, and Msgr. Liam Bergen, who, in his homily, gave a very beautiful reflection on the life of St. Patrick and made many applications to our present situation.

We are so grateful to Richard Clark and the members of the Archdiocesan Festival Choir for the beautiful music they provided.

I was, of course, very pleased to be able to hear "Our Lady of Knock," one of my favorite hymns, sung at the Mass.

Despite not having the typical crowd in the cathedral, we proceeded with the blessing of the shamrocks, which we later delivered to the residents of Regina Cleri.

Finally, I want to let you all know that, in this time of limited public activities, I have been preparing a virtual Lenten retreat that will be presented through CatholicTV and the different online platforms of the archdiocese. It will begin this Monday, March 23, and air each weeknight next week at 7 p.m. In addition, there will be a special concluding day of retreat on Holy Thursday.