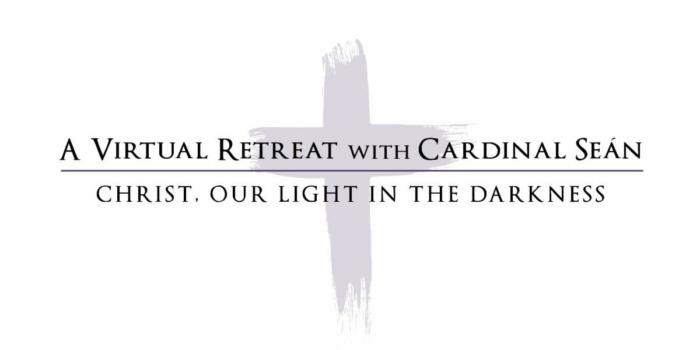 Though Catholics in the Archdiocese of Boston are beginning the fourth week of Lent with Masses and other parish activities suspended, they now have an opportunity to join Cardinal Sean P. O'Malley for a 5-day "Virtual Lenten Retreat" broadcast through CatholicTV, online and through social media.

The program's five, half-hour installments will air each evening from March 23 to 27 at 7 p.m. and include reflections by Cardinal O'Malley on topics such as "Prayer," "Mercy and Forgiveness," and "The Seven Last Words" of Jesus.

There will also be an additional installment on the Eucharist at 7 p.m. on Holy Thursday, April 9, immediately followed by the televised Mass of the Last Supper at the Cathedral of the Holy Cross.

"We will remember this Lent as one 'in quarantine.' Social distancing the new norm as daily social interactions are suddenly unavailable to us. Schools are closed. We can't go out to restaurants. Even public Mass has been suspended to curtail any further spread of this coronavirus. Many people feel alone. Many are scared. And people are thirsting for something good," the archdiocese said in its March 21 announcement of the retreat.

"This Virtual Lenten Retreat with Cardinal Seán is a means for our shepherd to feed us, to comfort us, and to give us the hope we need right now," the archdiocese added.

Following is the complete schedule of topics for the retreat. The air/ streaming time of each session is 7 p.m.:

Wednesday, March 25 -- "Faith: The Key to Meaning and Call to Friendship"

Thursday, March 26 -- "Who is My Neighbor? The Good Samaritan"

Holy Thursday, April 9 -- "The Eucharist," followed by The Mass of the Lord's Supper from the Cathedral of the Holy Cross at 7:30 p.m.