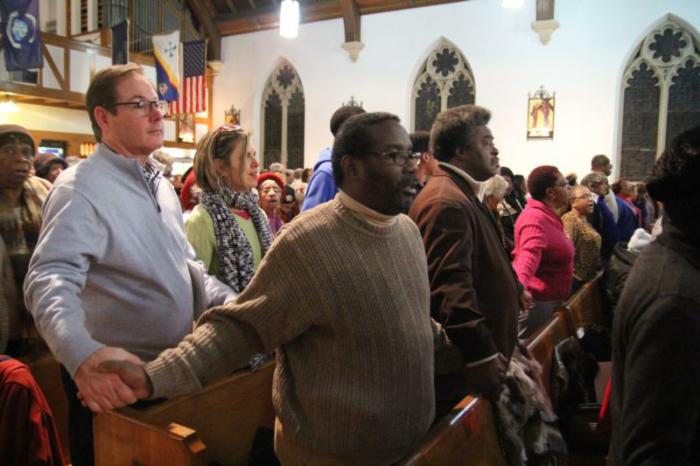 People join hands during a service at St. Katharine Drexel Church in Chester, Pa. In a March 12, 2020, announcement, the Philadelphia Archdiocese said Catholics in the archdiocese who do not wish to attend Sunday Mass for fear of spreading or contracting coronavirus are no longer obligated to do so, until further notice. (CNS photo/Sarah Webb, CatholicPhilly.com)

PHILADELPHIA (CNS) -- Catholics in the Archdiocese of Philadelphia not wishing to attend Sunday Mass for fear of spreading or contracting the coronavirus are no longer obligated to do so, until further notice.

The archdiocese made the announcement March 12.

Philadelphia Archbishop Nelson J. Perez, in union with all the Catholic bishops of Pennsylvania, "has dispensed the faithful ... from the obligation to attend Sunday Mass," according to an archdiocesan statement.

But all regularly scheduled Masses in the 214 parishes of the archdiocese will remain open to the public for all those who to want to participate.

The highly infectious and deadly virus has sickened 137,445 people worldwide, as of midday March 13, according to a Johns Hopkins University website that is tracking COVID-19 globally. The death toll is 5,088, according to the site, which also reported that close to 70,000 people have recovered. In the United States, there are 1,268 confirmed cases and 36 deaths.

It can be spread through person-to-person contact, which has led civic leaders, sports leagues, colleges and religious communities to cease large gatherings of people in order limit exposure to the virus, also known as COVID-19.

Pennsylvania Gov. Tom Wolf issued an order March 12 to close all schools, gyms, community centers and entertainment venues in Montgomery County, which has detected 13 presumptive positive coronavirus cases of the state's total of 22 to date, according to the Pennsylvania Department of Health.

"No mass gatherings should be held, including conferences and rallies," Wolf said. "By closing these facilities, we can control the spread of this disease, that's the hope. And we can redirect our public safety and health officials to where they are needed the most."

The plan takes effect March 13 and will last 14 days in the hopes that "social distancing" -- limiting person-to-person contact -- will prevent further spread of the virus.

A number of U.S. dioceses, like Philadelphia, announced that at this time Catholics have no obligation to attend Mass but also planned to continue to offer Masses. They encouraged anyone with a compromised immune system, especially the elderly, to remain home.

Those that have canceled public Masses include the archdioceses of Seattle, Washington, Chicago, Newark, New Jersey, and Santa Fe, New Mexico, and the dioceses of Salt Lake City and Little Rock, Arkansas. In addition, many diocese have announced the closure of schools for a period of two weeks or more and the suspension of sporting events and other large-group parish events.

Since the outbreak of the coronavirus since, even before the suspension of public Masses and school closings, U.S. Catholic dioceses have taken precautions to guard against the virus' spread. Among the most common preventative measures have been urging reception of holy Communion in the hand, suspension of distribution of the Communion cup and exchanging the sign of peace without physical contact.

They also all have been reminding parishioners to take commonsense steps related to hygiene in their personal lives.

In the Chicago Archdiocese, Cardinal Blase J. Cupich said March 13 that suspending public celebration of the Mass "was not a decision I made lightly."

"The Eucharist is the source and summit of our life as Catholics," he said in a statement. "And our schools and agencies provide essential services to many thousands across Cook and Lake Counties.

"But, in consultation with leaders from across the archdiocese, for the sake of the safety of our students, parishioners, and all the women and men who serve the people of the archdiocese, it is clear that we must take the better part of caution in order to slow the spread of this pandemic."

Bishop Anthony B. Taylor of Little Rock urged Catholics in his diocese to remain strong, rely on their faith and follow protocols issued by health officials to avoid the coronavirus and keep themselves and others healthy.

"As we continue to battle this public health crisis as a church and as a country, let us not lose sight of the fact that for us Christians, our ultimate peace and hope rests in Jesus Christ," Bishop Taylor said.

"Through the hard work of our dedicated health professionals, and with our cooperation and our faith in Jesus Christ, we will make it through the trying times that are sure to come over the weeks and months to come," he added in a statement.

"Although these measures (to cancel public Masses, etc.) may seem drastic," Bishop Taylor said, "our faith also binds us together in ways that run deeper than our public gatherings. Let us continue to pray for one another, and know of my fervent prayers for all of you during these times."

Los Angeles Archbishop Jose H. Gomez termed it a "grave and extraordinary moment" to dispense Catholics from their obligation to attend Sunday Mass for the next three weeks. He also asked parishes to make preparations to limit the numbers of people attending Masses to 250, citing recommendations from California public health officials.

"We need to approach this emergency with faith and confidence in God and also with prudence," Archbishop Gomez said in a March 13 message to the faithful issued on AngelusNews.com.

In the Archdiocese of Washington, Archbishop Wilton D. Gregory echoed his brother bishops in saying his decision to close schools and cancel public celebration of Masses "does not come lightly."

"My number one priority as your archbishop is to ensure the safety and health of all who attend our Masses, the children in our schools, and those we welcome through our outreach and services," he said. "We are profoundly saddened that we are not able to celebrate our sacraments as a community for the time being, but we know Christ remains with us at all times -- specifically in times of worry like this."

Also in Washington, the Basilica of the National Shrine of the Immaculate Conception, the premier Marian shrine in the United States and one of the largest Catholic churches in the world, announced that due to the coronavirus pandemic, public Masses and confession are suspended there starting March 14 "until further notice." The basilica will remain open for private prayer from 9 a.m. to 5 p.m. (EDT).

In the Archdiocese of Portland, Oregon, a statement from archdiocesan officials said the Eucharist is the way people "encounter the mystery of our redemption, are nourished by God's word, and receive the body, blood, soul and divinity of Jesus Christ.

There is a "grave obligation" for Catholics to attend Mass on Sundays and holy days of obligation, it said, but a "just cause," like keeping worshippers safe from the pandemic, can allow for releasing them from the obligation. The decision comes "out of an abundance of concern for the health and well-being of the people of God."

Archbishop Bernard A. Hebda of St. Paul and Minneapolis, in announcing the lifting of the Mass obligation in his archdiocese, asked that people join him in a "special day of fasting, abstinence and prayer invoking God's help in these challenging days for our archdiocese, our country and the world."

"On that day, I invite Catholics who are ordinarily bound to observe fast and abstinence on Ash Wednesday to prayerfully make this same sacrifice next Wednesday," Archbishop Hebda said.

Regarding Sunday Mass, even for those who stay home, Sunday remains a holy day, the archbishop said. Catholics should still observe the Lord's Day by making a spiritual Communion while watching Mass online, on TV, or radio, he said.

One answer for Catholics in dioceses with no public Masses being celebrated or those Catholics who must refrain from attending Mass because of health concerns might be to view Mass at home via a new, simplified website launched by the CatholicTV Network in the Boston Archdiocese March 13.

At www.WatchtheMass.com, viewers can watch the Mass in English every day from Sunday to Friday and the Mass in Spanish every Sunday.

Boston Auxiliary Bishop Robert P. Reed, president of CatholicTV, said: "The launch of this new website comes in response to the quarantines, travel restrictions and church closures due to the COVID-19 pandemic. The CatholicTV Network seeks to serve Catholics who cannot get to Mass during this time of crisis and asks dioceses to share this resource with all their parishes."

Gambino is director and general manager of CatholicPhilly.com, the news website of the Archdiocese of Philadelphia. Mark Zimmermann, Joe Ruff, Ed Langlois and staff at AngelusNews.com contributed to this roundup.