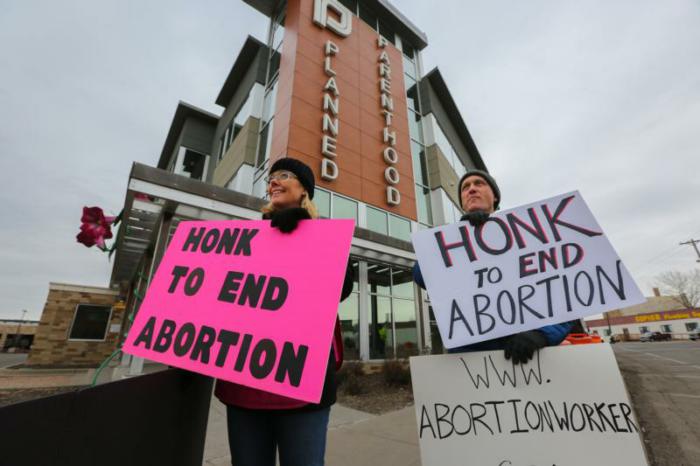 "Given that each human life is created in the image and likeness of God and has value, to honor those who purposefully end such life is an affront not only to our Creator but to the foundational values of civil society," Archbishop Bernard A. Hebda of St. Paul and Minneapolis said in a March 10 statement. "There is no way around it -- abortion kills children."

He continued: "What gives me hope, however, are the countless women and men of goodwill who tirelessly give of themselves to accompany women in crisis pregnancies, love and assist moms and babies, and work to create a culture of life in our communities and in our world. It is those people we should be honoring."

The day fell in the middle of 40 Days for Life Twin Cities, Feb. 26-April 5, during which pro-life advocates pray 6 a.m.-6 p.m. outside Planned Parenthood in St. Paul.

"The professionals who ensure women can access safe reproductive health care do so despite threats of violence & the persistent push to undermine Roe v. Wade. That's why today is Abortion Provider Appreciation Day in Minneapolis," Frey tweeted.

The day, which has been commemorated annually by activists who support legal abortion as the National Day of Appreciation for Abortion Providers since 1996, marks the March 10, 1993, murder of Dr. David Gunn, who was shot and killed in Pensacola, Florida, because he provided abortions.

The resolution states that the day honors Gunn "and the many other abortion providers and clinic staff face who support women's patients' reproductive choices."

In a March 9 email, the archdiocese's Office of Marriage, Family and Life urged Catholics to contact the St. Paul City Council members to express disdain for the decision. It also highlighted the related efforts of three pro-life organizations: Twin Cities-based Pro-Life Action Ministries and Human Life Alliance, and Students for Life of America, which is based in Virginia.

Students for Life of America is collecting signatures for a petition calling for the cancellation of Abortion Provider Appreciation Day in the future and is expected to deliver it to council members at their March 11 meeting.

The Office of Marriage, Family and Life encouraged Catholics to send letters to the council members to "show your disdain for this new day in Minnesota."

"Be civil, but be direct and firm," it advised. "What they have done is unconscionable."

The office also said messages to City Council members should "express your disgust at this resolution and their failing to represent the large pro-life population in the city of St. Paul."

In addition to contacting the council members, the office encouraged Catholics to sign the Students for Life of America's petition. Organization representatives were to deliver the petition at the City Council's March 11 meeting.

Wiering is editor of The Catholic Spirit, newspaper of the Archdiocese of St. Paul and Minneapolis.