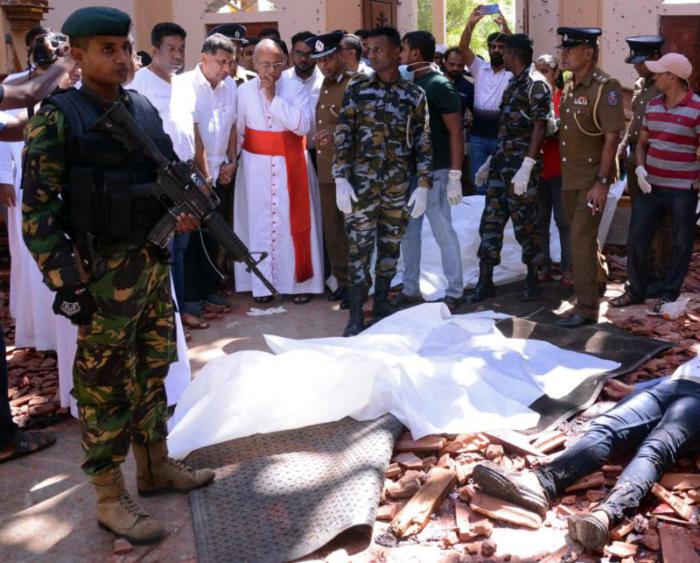 Cardinal Malcolm Ranjith of Colombo, Sri Lanka, looks at the explosion site inside a church in Negombo April 21, 2019, following a string of suicide bomb attacks on churches and luxury hotels across the island. Cardinal Ranjith says he is ready to launch street protests if Sri Lanka's government does not find and arrest the culprits. (CNS photo/Reuters)

Ucanews.com reported the cardinal said the administration has not taken action regarding the suicide bombings that killed about 300 people, including 40 foreign nationals, and injured at least 500.

"The most senior person in the government should have been brought to the Criminal Investigation Department and questioned if he had been aware in advance of the Easter bomb blasts," Cardinal Ranjith said March 8 at the Basilica of Our Lady of Lanka.

"There are reports that police officers investigating the Easter Sunday suicide bomb blasts are currently being transferred," he said.

The cardinal said the government also should publish all the interim committee reports on the bomb blasts.

"Investigations into the Easter Sunday attacks have revealed that current government-related 'big people' have also been involved, and no action has been taken against them," he said. "We will take to the streets with our people whether we have this election or not."

A parliamentary election has been slated for April 25.

The suicide attacks became a turning point in the presidential election, bringing national security to the top of the agenda.

The government has initiated several investigations into the blasts, including one by a presidential panel and another by a parliamentary select committee.

President Gotabaya Rajapaksa appointed an independent commission to find the real culprits, supporters and all those responsible for the Easter massacre.

Cardinal Ranjith appeared before the presidential commission of inquiry Dec. 6-7. He said he wanted to represent the concerns, grievances and views of the victims, their families and the Catholic community at large, ucanews.com reported.

Earlier, Cardinal Ranjith said that if he had known an attack had been planned, he would have closed all churches and protected the faithful.

He said he has confidence in the current presidential commission.

Colombo Archdiocese has organized special prayer services and holy hours at all churches from April 17-21 to pray for the bombing victims and their families.

Editors: The original story can be found at www.ucanews.com/news/sri-lankan-cardinal-prepared-to-launch-protests/87412