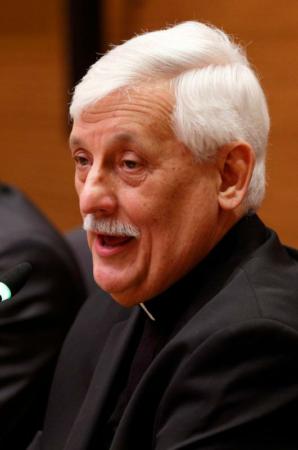 Jesuit Father Arturo Sosa Abascal, superior general of the Jesuits, speaks at a news conference in Rome Oct. 18, 2016. At the heart of Pope Francis' teachings on reform, the care for the poor and for creation are the principles of discernment and listening established by St. Ignatius of Loyola, Father Sosa said in a March 5, 2020, article. (CNS photo/Paul Haring)

VATICAN CITY (CNS) -- At the heart of Pope Francis' teachings on reform, the care for the poor and for creation are the principles of discernment and listening established by St. Ignatius of Loyola, said Jesuit Father Arturo Sosa.

In an article published by the Jesuit journal La Civilta Cattolica March 5, Father Sosa, superior general of the Jesuits, reflected on the pope's approval of the order's "universal apostolic preferences" in February 2019.

The preferences, which he said will guide the mission of the Jesuits for the next 10 years, are: "to show the way to God through discernment and the spiritual exercises; to walk with the poor, the outcasts of the world, those whose dignity has been violated, in a mission of reconciliation and justice; to accompany young people in the creation of a hope-filled future; to collaborate in the care of our common home."

"There is no preference more important than others," Father Sosa wrote. "All of them are for us a call that touches our identity and must be considered and understood together. Moreover, they do not list new 'things' to do but deal with 'inspiration on how to do' and live the mission, within a universal horizon, to be applied in the specifics of the places where we find ourselves."

The Jesuit superior said the order's universal apostolic preferences for the next decade are rooted in the experiences of St. Ignatius of Loyola who "teaches us that we can't give old responses to the new problems of the church and the world."

"To reform institutions, it is necessary to reform the hearts of those who govern it," Father Sosa wrote.

The four principles that will guide the Jesuits, he added, "require care, prayer, study, service, and witness, both personally and the whole Society, in order to blossom."

"This is a way of being a church that Pope Francis knows, because he too belongs to this spiritual experience of ours," Father Sosa said. "Like two legs, the spiritual and intellectual dimensions will sustain us along the way. The rest will be done by the collaboration between us, in fidelity to the Gospel and the teachings of the magisterium."