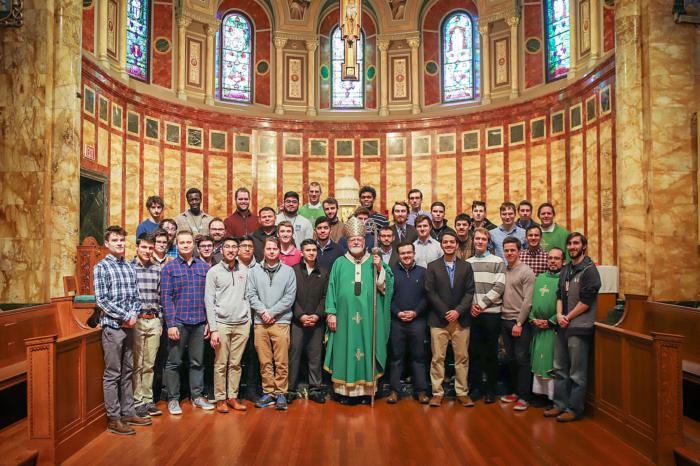 On Saturday, Feb. 22, Cardinal O'Malley joined the group of men who would be candidates for St. John's Seminary for their discernment retreat at the Betania II Retreat Center in Medway. Pilot photo/CardinalSeansBlog.org

As I mentioned last week, over the weekend we held our archdiocesan discernment retreats for men considering a vocation to the priesthood.

So, on Saturday, I joined the group of men who would be candidates for St. John's Seminary for their retreat at the Betania II Retreat Center in Medway.

Between the retreat at Pope St. John XXIII Seminary, which I spoke of last week, and this retreat, we had over 50 men who came together to consider the possibility of a vocation to the priesthood.

During the weekend, I gave them a series of conferences, and there were a number of panels and group discussions led by our seminarians and vocations team.

We were also blessed with very nice weather for the weekend, which allowed the men to enjoy a soccer match.

I was very impressed by the men who participated, and we are very grateful to all those pastors and campus ministers who referred them to the retreat. Many of those who participated commented on what a wonderful experience it was to be with people who shared their faith, ideals and sense of desire to understand what God is asking of them in their lives.

The retreat culminated with a Mass in the chapel of St. John's Seminary on Sunday.

I always tell the men on these retreats that if they haven't yet told their girlfriends that they are considering the priesthood, we would be happy to blur their faces in the group photo. As you can see, no one took us up on that this time!

Wednesday was, of course, Ash Wednesday, which is such an important date in the Christian calendar.

It is an opportunity for us to begin these 40 days of Lent in a way that allows us to deepen our relationship with the Lord, and to be more faithful in our life of discipleship and participation in the community.

On Ash Wednesday, I celebrated two Masses. The first was the noon Mass at Bethany Chapel in the Pastoral Center, which was standing room only.

Then, that evening, I had Mass at St. Bridget Parish in South Boston. There, the church was full as well, and it was so encouraging to see so many young people join us.

It is always very edifying to see how many Catholics respond to the practice of receiving the ashes.

On Thursday morning, I was pleased to meet with the new superior of the Missionaries of Charity in Boston, Sister Rose Therese. She is originally from India but was most recently working in Asbury Park, New Jersey, before coming to Boston.

She told me how happy she was to be here and how pleased she was to see the wonderful ministry of the sisters in Boston, working in outreach to homeless women and caring for the children and families of the neighborhood.

I shared with her the story of the time that I first met Mother Teresa, back when I was teaching at the Catholic University of America in 1971.

Mother Teresa was receiving an honorary degree from CUA, but at the time no one really knew anything about her, and only a handful of people were present.

Eileen Egan, the head of Catholic Relief Services, introduced her and spoke about her work taking care of the dying -- picking people up in the train stations and streets of Calcutta and bringing them to an abandoned Hindu temple, where they could die with dignity, surrounded by love.

Afterwards, I went to Cardinal O'Boyle and said: "Your Eminence, this was a terrible blunder." He was a bit taken aback and asked, "What do you mean, Brother?" And I answered, "This should have been at the Shrine of the Immaculate Conception, and you should have had all the students and faculty of Catholic University there to hear this woman!"

Of course, soon, Malcolm Muggeridge's documentary and book, "Something Beautiful for God," would bring Mother Teresa to the consciousness of the world -- but I was very fortunate to have had a preview during my days teaching at the Catholic University!