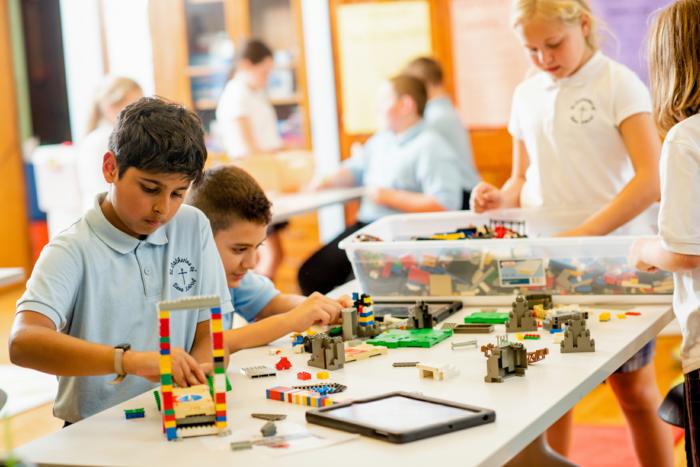 NORWOOD -- When St. Catherine of Siena School began holding a weekly STREAM (Science, Technology, Religion, Engineering, Art, and Math) class for its students this school year, the two instructors chose an overarching theme relating to a real-world problem: the task of rebuilding the Cathedral of Notre Dame in Paris after the fire a year ago.

O'Connor said she and Maakaroun want the students to have "a growth mindset" and go "outside their comfort zone," even risking failure, in a safe environment.

At the start of the 2019-2020 academic year, they challenged the students to build a bridge that could hold 50 pennies. This was to help them learn the engineering design process, which is a primary focus of the weekly class. Many students stopped when they completed this task, but O'Connor and Maakaroun challenged them to redesign and continue adding pennies until the bridge broke.

"That's an important theme in our classrooms, to just try something that may or may not work," O'Connor said.

The students in the middle school grades have been learning about the history and architecture of cathedrals. They built a website and an application, and challenged themselves to find ways to illuminate a cathedral's interior. Soon, O'Connor said, they will work in small groups to design their own cathedrals.

For the younger grades, Maakaroun uses a curriculum kit from the Museum of Science in Boston. Since STREAM includes religion, she sometimes uses a Bible story to introduce a problem-solving activity. For example, the students built fishing nets after reading the story of the miraculous catch of fish.

Teachers send their plans for each month's curriculum to O'Connor and Maakaroun, who try to connect their STREAM curriculum to what each grade is learning.

"Whatever they're learning in their classroom, we try to make a hands-on activity related to that content and knowledge in our class," Maakaroun said.

In the future, she said, they might try to have a different STREAM theme for each grade.

O'Connor and Maakaroun have both taken courses through Worcester Polytechnic Institute (WPI), which collaborates with them to develop their STREAM curriculum. An instructor meets with them once a month and works with teachers during their professional development.

Parent volunteers have also come in to the school to teach students about different aspects of STREAM and how they relate to careers. One guest was an architect who showed them how to do perspective drawings. Another was a computer engineer who taught them about 3D printing, which they will use to make elements of their cathedrals. O'Connor said that the engineer's company has been hired to create the prototype of the real Cathedral of Notre Dame.

"We bring in the community members to work with our students to tie them to real, authentic STEM careers," O'Connor said.

They also collaborate with the Norwood Science Center, which loaned them an earthquake shake table for students to use for a project: designing buildings that could withstand earthquakes.

During Catholic Schools Week, students from different grades contributed to one project: designing a prototype of St. Catherine of Siena School.

"It was interesting to see what the kids thought were important," O'Connor said. For instance, the fourth-grade students wanted to include a basketball net on the side of the gym, because that feature was important to them.

Throughout the week, each class added to the prototype during their STREAM period. It was then displayed outside the classroom.

"That was a fun activity, to see how they could build on each other, literally," O'Connor said.