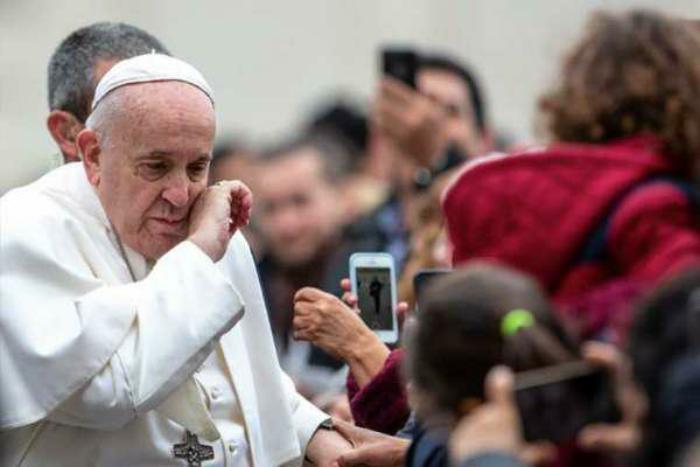 Vatican City, Mar 1, 2020 CNA.- Pope Francis said Sunday he will not take part in his annual Lenten retreat with the Roman Curia in Ariccia this week due to a cold he has had for several days.

“I also ask you to remember in prayer the spiritual exercises of the Roman Curia, which will begin this evening in Ariccia,” the pope said March 1.

“Unfortunately, a cold forces me not to participate this year: I will follow the meditations from here.”

The pope announced the decision to stay at the Vatican after giving his Sunday catechesis and leading the Angelus prayer from a window of the apostolic palace.

Francis, who canceled his public audiences starting Thursday, had to pause several times to cough during the Angelus and address.

He added that he will join “spiritually” the curia and all those praying or doing the spiritual exercises at home.

The retreat begins in the evening March 1 with bishops and cardinals of the Roman Curia. It ends March 6.

Starting Feb. 27, a slight illness has kept Pope Francis close to home. He has canceled his larger audiences for three days but continued to offer his early morning Mass in Santa Marta and to keep individual meetings.

Since 2014, the five-day spiritual exercises have been held at the Casa Divin Maestro retreat house in Ariccia, which is about 16 miles south-east of Rome.

Nestled in the woods on Lake Albano, Casa Divin Maestro is just a short distance from the papal summer residence at Castel Gandolfo.

Pope Francis every year chooses someone to lead the spiritual exercises. In 2020, he selected Fr. Pietro Bovati, SJ, a Scripture scholar and secretary of the Pontifical Biblical Institute.

Bovati, 79, will preach on the “encounter between God and man” focusing on the books of Exodus, the Gospel of Matthew, and the Psalms, according to the Vatican.

The practice of the pope going on retreat with the heads of Vatican dicasteries each Lent began around 80 years ago under Pope Paul XI. The spiritual exercises were held in the Vatican, but beginning in Lent 2014, Pope Francis chose to hold the retreat outside of Rome.

According to the Pauline priest who runs the retreat center, a typical day during the retreat begins with Mass then breakfast.

The bishops and cardinals then listen to the first meditation in the chapel. The second meditation is heard after lunch, Fr. Olinto Crespi told CNA in 2017. Other time is devoted to prayer. The retreat house has internet, so dicastery heads who need to answer emails or do some work during the week may do so.